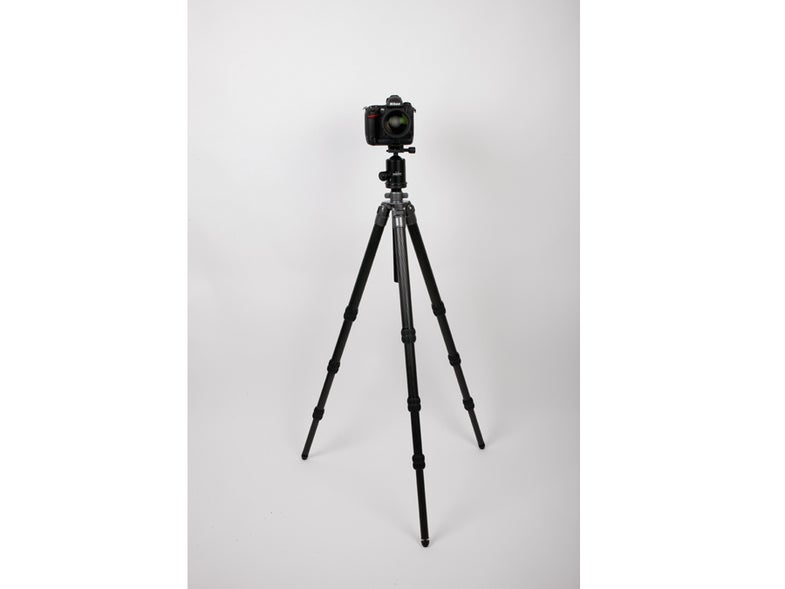 After all, it supports up to 26 pounds of gear, and you’d be hard-pressed to find anyone short of a hardcore wildlife shooter whose camera and lens approaches that weight. Even a Canon EOS-1Ds Mark III with a hulking 400mm f/2.8 IS lens doesn’t hit 15 pounds. Sure, video shooters can use this Prometheus-caliber support, but photoretailer Adorama, which uses Flashpoint as its house brand, is promoting this ’pod to photographers like you and me. It’s clearly a statement that Adorama wants to be taken seriously in the tripod category. Not mere low-cost gear, but good gear that runs right up to the 26- pound-supporting pro level.

And the F-1428 makes the case for itself pretty well. With four leg sections and a center column, it rises to 6 feet, yet closes down to 24 inches. At 5.56 pounds, its relative light weight comes from the carbon-fiber construction of the legs. A three-section aluminum model with similar capacity would be a pound or two heavier and several inches longer. Carbon fiber is also strong and not frostbite bait in the cold, as aluminum is.

Of course, there isn’t just carbon fiber on this ’pod. The leg joints and collar are cast aluminum with a Gitzo-inspired gray crinkle finish. Bolts and the hook extending from the center column (hang ballast here) are stainless steel. The half-twist leg locks are rubber-covered aluminum.

In our field tests, everything worked smoothly and intuitively for both high and low camera positions—the legs splay out and the center tube reverses for getdown macro work.

In addition to tripods, Adorama has an impressive array of Flashpoint ballheads, gimbal heads, and quickrelease plates to handle virtually any camera and application. While the best ballheads can cost $600-plus, the Adorama line of magnesium-alloy models is under $100. These Arca-Swiss-inspired heads are well made and reasonably smooth, but if you’ve been spoiled by the creamy action of a high-priced head, the savings probably won’t compensate.

At $330, the F-1428 sells for less than half of what the platinum-caliber Gitzo GT2542L does, and it’s priced more like a good aluminum model.

So what are the compromises? This Flashpoint lacks some of the smoothness of a top-end unit, and has a little extra weight here and there (for instance, the center column is aluminum, not carbon fiber; and the leg locks are quite large). Those fourth leg sections are thinner than you might have in a threesection tripod (which means less rigidity), and an annoying allenkey bolt is used on the quick-release plate (give us the old slot that takes a Japanese 100-yen coin or American nickel).