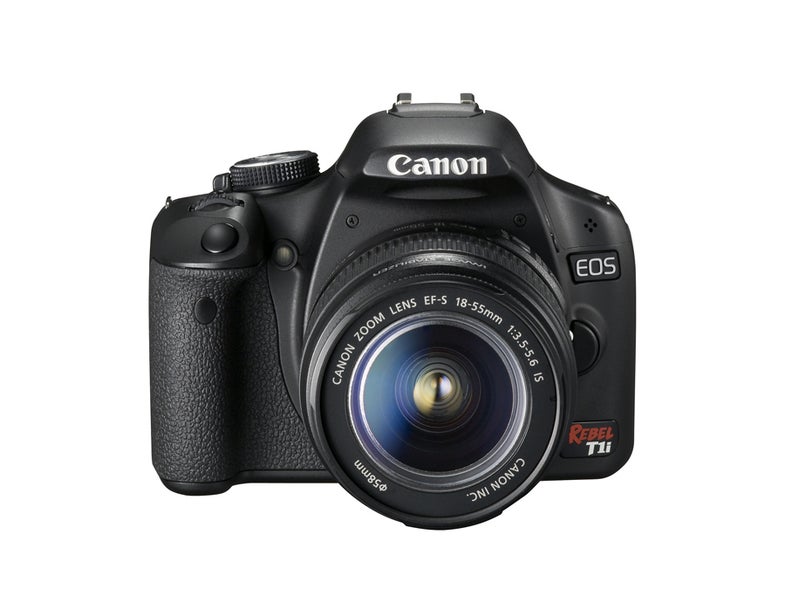 So you know a thing or two about photography, or plan to learn, and want the best entry-level DSLR you can get? Then take a look at Canon’s new EOS Rebel T1i.

We already knew that it’s the first Rebel to shoot high-definition video. But now that we’ve run it through our battery of tests in the Pop Photo Lab, we can give you a better reason to check it out: Performance. The Rebel T1i beat its direct competitors in most areas of our tests, particularly in controlling noise as the ISO rises. And it does this while giving you more megapixels (15.1MP) than any other sub-$1,000 DSLR.

Of course, at their highest ISOs, all of these cameras become overly noisy. But the Rebel T1i maintained a Low or better noise rating in our test all the way up to ISO 3200. Since that’s the top standard ISO, as long as you don’t turn ISO expansion on, you’re golden.

Given that the T1i shares the same sensor as the more costly EOS 50D, it should come as no surprise that it also topped its competitors in resolution. It rated Extremely High (2380 lines) compared with their Very High scores under our new, more stringent, resolution criteria. Color accuracy was Excellent, with an average Delta E of 6.93.

In our version of speed trials-the autofocus test-the EOS Rebel T1i raced to the front of the pack. Its 9-point AF system locked on our target in a scant 0.32 seconds at the test’s brightest light level of EV 12, and it still took less than a second even when the lights dimmed to the near-moonlit darkness of EV -1. That’s a half-stop dimmer than the light level Canon says the AF system can handle. Indeed, in our test, the Rebel managed to zero in on the target in 1.18 sec at EV -2 (the least light we consider), while neither the Nikon nor the Olympus could focus at all in light that dim.

Buttons, dials, and controls are designed to make the camera quick and easy to operate. We appreciated finding the ISO button just behind the shutter, letting you change sensitivity on the fly. To avoid confusion, Canon put the exposure compensation button on the camera back, which also makes it easier to use in combination with the lone command wheel. (We wish there were two command wheels to make manual shooting more convenient, but you almost never find that setup on an entry-level DSLR .)

And, as on the Olympus E-620, Canon lets the menu control buttons double as access to frequently used functions, such as white balance, AF, drive mode, and Picture Styles (Canon lingo for JPEG profiles).

The Rebel T1i’s body construction is as solid as you can hope for in an entry-level DSLR . You won’t find the weather sealing that you’ll get with a pro body, but the grip and an area on the back for your thumb have a textured rubbery material that makes the camera comfortable to hold. The LCD packs 920,000 dots into a gorgeous 3-inch screen, for lots of extra detail that comes in handy during live view and video shooting. If only it could be flipped, tilted, and swiveled, like the smaller and lower-res monitors on the Nikon and Olympus.

Then there’s video. The Rebel T1i can record at a pixel resolution of up to 1920×1080, the limit of the U.S. HD standard, though at that resolution the frame rate is a choppy 20 frames per second. But if you just turn down the resolution to 1280×720, you get 30 fps, which matches the frame rate of your HDTV-and isn’t that where you want to watch it? At that setting, we got video that knocked our socks off.

As with all of the first generation of video-shooting DSLR s, you can’t autofocus continuously during video capture. However, if you press the asterisk button on the camera back, the Rebel will focus once-press it again to focus on something else.

All that button-pushing is likely to make for shaky video if you’re not careful. But if you plan your shots, use a tripod (preferably on a fluid head), and capture short snippets of video, you’ll be amazed at the results-even when viewed unedited from the camera’s built-in mini-HDMI output.

Live view shooting remains the same as on earlier models. You can choose from two types of AF: Contrast detection, though sluggish, maintains an uninterrupted view of your subject, while phase detection interrupts your view by closing the shutter, flipping down the mirror, focusing, then flipping the mirror up and opening the shutter-a clunky process. Still, live view can be useful for landscape, stilllife, and macro work.

The image quality the Rebel T1i offers with its 14-bit RAW capture, Digic 4 processing, and accurate 35-zone metering is astonishing given its price. Just a few years ago, you couldn’t hope to get talent like this for under $1,000. In all, an amazing first-or step-up-DSLR .