A new DSLR for the advanced amateur. 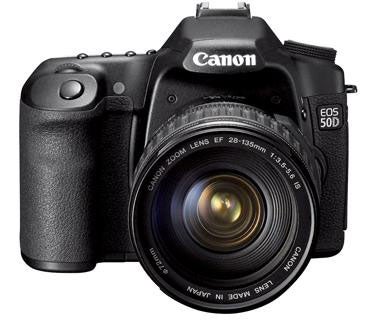 Pity the Canon EOS 50D. Between the hoopla about the latest full-frame juggernauts from Nikon, Sony, and Canon itself, and the buzz on the debut of the Micro Four Thirds system, it’s easy for an impressive new advanced-amateur DSLR to get overlooked.

Granted, the 50D and 40D share the same body and many features; both have APS-C-sized CMOS sensors (1.6X lens factor); and they even use the same BG-E2N battery grip ($190, street). But as if to underscore the differences, the 10.1MP 40D stays in the Canon line ($950, street, body only).
So what’s the big change? Aside from more megapixels, it’s the DIGIC 4 processor, with ISOs up to 12,800, in-camera vignetting correction, and three sizes of RAW files.
To give you an idea of the processor’s power, even though the 50D packs 5MP more than the 40D, its burst rate is 6.3 frames per second, close to the 40D’s 6.5 fps. And the 50D shoots at full tilt for up to 90 large Fine-quality JPEGs or 16 RAW files when you use a UDMA CompactFlash card, according to our tests. With an old-fashioned CF card, expect up to 60 JPEGs.

The DIGIC 4 also gives you Canon’s Auto Lighting Optimizer and Peripheral Illumination Correction. The first adjusts brightness and contrast for images that might not be perfectly exposed when you shoot them. The second lets you load the camera with technical data for as many as 40 EF lenses and then minimizes any vignetting that a particular lens might have.

The new processor also detects up to 35 faces in a shot when shooting in live view. But it doesn’t do anything for autofocus in live view. With slow contrast-detection AF, this remains a clunky experience.

If you liked the design of the 40D, or for that matter, the 30D, you’ll love the 50D. The well-proven approach puts a mode dial on the top left, with six scene modes for less experienced shooters and two custom modes for advanced types. On the right, there’s the status LCD, along with three buttons for metering, white balance, AF, drive mode, ISO, and exposure compensation. Three buttons controlling six functions? Yes, because the 50D has two scroll wheels: one next to the shutter button, and a larger one on the camera back.

Despite 10 buttons, two wheels, an on/off switch, and a tiny joystick, the 50D isn’t cluttered. There’s even room to comfortably place your thumb. And the camera is contoured for a solid grip while you twist it in whatever direction you need.

Advanced shooters might complain about the single CF slot instead of the dual slots found on Nikon’s D300 ($1,560, body only). But no one will gripe about the 50D’s hot-shoe. With a nifty plastic ridge that mates with Canon’s latest flash units, this shoe forms a tighter seal and battles dust and moisture better than older models.

Tale Of The Tests

In our lab, the 50D scored well, with an Excellent rating in overall image quality right up through ISO 1600 that dropped only to Extremely High at ISO 3200 and 6400. We saw a marked improvement in color accuracy over the 40D. Both scored Excellent, but the 50D served up an average Delta E of 6.6, versus the 40D’s 7.7.

Early adopters have complained about the 50D’s noise levels. While they have a point, let’s not overstate the issue. The 50D performed well overall in our noise tests and handily beat its predecessor at higher ISOs. For example, at ISO 1600, the 50D scored 1.7 for a Low rating, while the 40D produced slightly more noise (2.0) and earned a Moderately Low rating. At ISO 3200, the 50D rated Moderately Low at 2.2, while the 40D scored 2.9 for a Moderate rating.

That said, there are some nuances. First, the new camera underperformed the 40D at the lower ISOs. At ISO 100, with a score of 1.1, it barely made it into the Extremely Low category, compared with 0.8 (also Extremely Low) for the 40D, which maintained its Extremely Low rating through ISO 200. The pattern continued until the two reached parity at ISO 800 (1.5, Very Low).

The way noise manifests itself at higher ISOs is another issue. At the top two settings, we saw bands of noise stretching across the image-not something photographers usually see from a Canon. At least the 50D still gives you a full stop more usable sensitivity than the 40D, which topped out at ISO 3200 and was noisier at that point than the 50D is at ISO 6400.

Finally, the “extended” ISO of 12,800 may have raised expectations too high. The 50D is so noisy at that setting that it may be more of a tease than a useful feature. In our test, noise hit 4.13, an Unacceptable rating. Canon perhaps would’ve been wise to limit ISO to 6400. Since Nikon has been so successful at extending the ISO range in the D700 and D3, though, Canon probably felt the need to extend to ISO 12,800. But it wasn’t necessary; both the Nikon D300 and D90 top out at ISO 6400, where in our noise test the EOS 50D beat them both.