There’s more to this mini Nikon DSLR than the price. 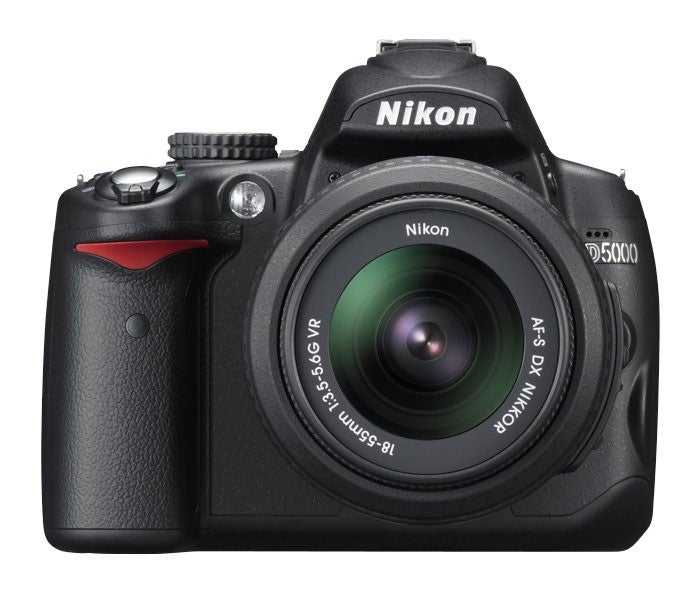 If the first number you look at when DSLR-shopping is the price, we understand. Blame it on the times.

The resolution of 2245 lines earns a Very High rating on our recently revised scale. Its big sister, the Nikon D90 ($930, street, body only), edged into the Extremely High range with 2315 lines-the winner, but not by a lot. You’d have to enlarge images from these two cameras to at least 11×17 inches before even hoping to see a difference in resolution. But it implies that, while they share a 12.3MP CMOS sensor in the DX format (1.6X lens factor), their in-camera processing is not the same.

In color accuracy, the difference is similarly negligible. The D5000 takes the honors, though just by a hair (average Delta E 6.73 versus 6.93 for the D90).

Where do you really see the difference in processing? Noise. The D5000 is at least 1 stop behind the noise-conquering D90 all along the ISO scale. This means that you get Very Low to Low noise from ISO 100 through 800. (The D90 keeps it Low through 3200.) So for a low-light classic- say, little Justin blowing out his birthday candles-the D90 will keep you in the clear. The D5000? Expect grainier results (though with $200 left in your pocket).

The most significant difference between them is in noise, with the Nikon turning in better results at ISO 800 than the Olympus does at ISO 100. And the Olympus reaches Unacceptable noise by ISO 1600, while the new Nikon doesn’t get there until ISO 3200.

Other impressive numbers from the Nikon: AF speed. Though slower than the D90 when using Nikon’s new 50mm f/1.4G AF-S lens (we tested the D90 with the older 50mm f/1.4 Nikkor AF), it still beat the E-620 in most light. At the brightest level (EV 12), the Olympus focused 0.1 second faster, and by the next step down (EV 10), the two were neck and neck at about 0.5 second. But the Nikon drew ahead as the lights dimmed. At the slightly-brighter-than-moonlight of EV -1, the Nikon focused more than half a second faster than the E-620. (Neither camera is rated to focus in light dimmer than EV -1.)

Of course, the 15.1MP elephant in the room is the new Canon EOS Rebel T1i, which we previewed alongside the Nikon last month. As we went to press, our tests of the T1i weren’t complete, so we can’t say how it stacks up. But some things are certain-the Canon has more resolving power, larger LCD, higher ISO range (up to 12,800), and higher price ($800, street, body only; $900 with 18-55mm f/3.5-5.6 EF-S IS lens). Results will be posted on www.PopPhoto.com as soon as they’re in.

Both the Canon and Nikon shoot high-def video with mono sound, but the similarities end there. Some photographers give Canon the edge because it can shoot 1920×1080- pixel footage; the Nikon’s maximum is 1280×720. While the Nikon’s 720p mode captures at the cinema-standard 24 frames per second, and Canon’s 1080p is a choppy 20 fps, if you set the Canon to 720p, it shoots at 30 fps for smoother footage that matches the frame rate of your big-screen TV. That’s also the spec on the new Pentax K-7 (previewed in this issue), but the Pentax is priced hundreds of dollars more than even the Canon.

When shooting video with the D5000, aperture is locked and AF disabled, so tracking can be hard and moving between different lighting conditions maddening. Indeed, don’t confuse any DSLR’s video capabilities with the powers of a high-def camcorder. For one thing, the D5000 captures clips no longer than 5 minutes at 720p. (For context, see “The Truth About DSLR Video” in this issue.) Camcorder veterans won’t have to adjust to one aspect of the new Nikon-its flip-and- swivel LCD. Unlike any swiveling DSLR screen to date, this one comes down along the center of the lens (not to the side), giving you a live view on the optical axis, just like a viewfinder or a fixed LCD. This feature limits the screen size to 2.7 inches (as with the Olympus E-620’s side-flip setup). The LCD turns inward (as do Olympus screens) to protect the surface. Screen resolution on both the Nikon and Olympus is 230,000 dots (versus 920,000 on the Canon’s 3-incher).

On either side of the screen are various control buttons. While we prefer the directcontrol approach that’s common on more expensive bodies, Nikon cut the space and learning curve by putting many functions into the menus. (Olympus has mastered this approach with its four-way control button, and Nikon could take a lesson from it.) One button we’re especially glad to see on the D5000 is a single-purpose live-view/viewfinder control.

The info display is straightforward and easy to read. Along with the viewfinder, it’s the only place to get shooting data. Like other DSLRs in this class, the D5000 doesn’t have a second display on the top right side of the body (as the D90 does).

Much like other recent offerings from Nikon, the D5000 lets you process RAW files in-camera. You also can edit images right on the LCD: Crop, straighten, adjust exposure, and remove red-eye. Get creative with fisheye effects and filters ranging from skylight to starburst. And with each new generation of DSLRs these effects evolve. For instance, there are enough starburst settings to get the effect not only the way you want it, but also so it looks realistic. Of course, the original file remains untouched by manipulation.

Up For The Count

So what has Nikon given us? With its impressive numbers in everything from price to megapixels to burst rate (at 4 frames per second, it’s a no-brainer for kids’ soccer games), the D5000 is the new king of Nikon’s family-friendly DSLRs.

Sure, the viewfinder is a pentamirror (not the brighter pentaprism of the D90 and up), and the noise performance is good, not amazing. But the small body easily goes anywhere and can capture video clips in a pinch. There’s enough control for the getting-serious photographer, as well as 19 picture modes for the unreformed point-and-shooter.

In all, this little DSLR adds up.