Built for pixel power, not for speed 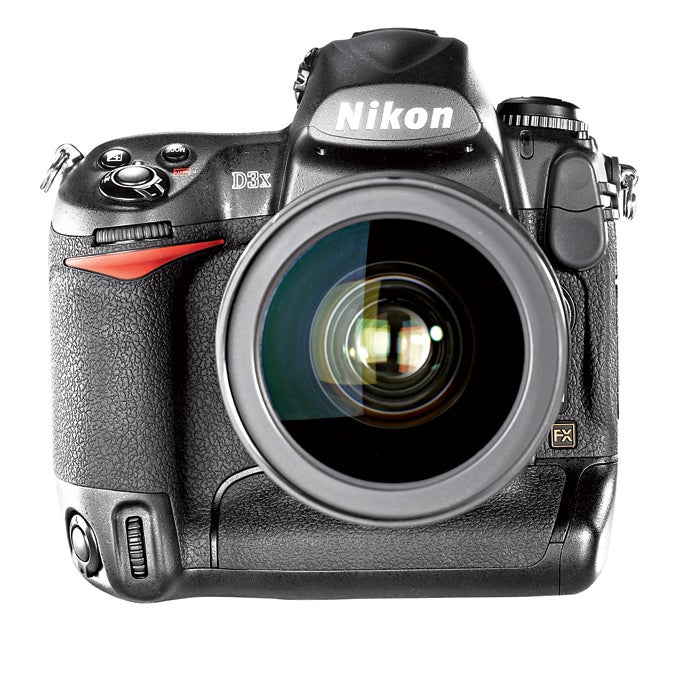 You’ve read it here before: Megapixels aren’t everything. Now that the 24.5MP Nikon D3X ($8,000, street, body only) has become the third full-frame DSLR to break the 20MP barrier, how well does that simple truth hold up?

As we pointed out in our Hands On last month (February 2009), raising the pixel count involves some tradeoffs. Not just for Nikon, but for the other powerhouses in this category, the Canon EOS-1Ds Mark III ($6,550, street, body only) and Sony Alpha 900 ($3,000, street, body only).

Chief among these: burst speed. The D3X captures full-frame images at a rate of 5 frames per second — not nearly as swift as the 9-fps rate of Nikon’s 12.1MP D3. (Both the Canon and Sony also have 5-fps burst rates.) Another compromise is sensitivity. The D3X has a top ISO of 6400, two stops below the astonishing ISO 25,600 of the D3.

But having run the D3X through our battery of tests in the Pop Photo Lab and used it extensively in the field, we think those compromises were worth it. This is an incredible DSLR. Take a look.

The D3X produces truly stunning pictures. Let’s start with resolution, the chief benefit of that full-frame 24.5MP Sony-made CMOS sensor. At its lowest standard sensitivity of ISO 100, the D3X captured an off-the-charts Excellent 3180 lines. The only DSLR to beat it: Sony’s own Alpha 900, whose 24.6MP sensor tested at 3230 lines. In real-life shooting, you’ll barely see the difference.

Color accuracy? Again, Excellent, with the best score of the new full-frame breed.

Noise performance was a little more complicated vis-a-vis the competition. Still, the Nikon did a top-notch job at suppressing noise throughout its expanded ISO 50-6400 range. At midrange and lower ISOs, the Canon EOS-1Ds Mark III and Sony A900 give the D3X a run for its money. But with only a (barely) Moderate noise score at ISO 6400, compared with Unacceptable for the A900 (the Canon’s sensitivity tops out at ISO 3200), the Nikon served up the cleanest images when lights were dim.

All together, these scores were enough to earn the D3X an Excellent rating in overall image quality from ISO 50 through ISO 3200 — a truly astounding range.

Indeed, the fact that the D3X is sensitive down to ISO 50 is a breakthrough for Nikon, whose previous DSLRs bottomed out at ISO 100. (The Canon goes down to ISO 50, too; the Sony, only to ISO 100.) Interesting, though, that the company backed away from the super-high ISOs of the D3 and D300 — perhaps deciding that the compromise in image quality at those levels just wasn’t worth it.

As we’ve come to expect these days, the D3X can capture RAW images at 14 bits per color. This expands the number of color gradations between the brightest white and darkest blacks, so you should see smoother gradations in your pictures. The natural side effect, however, is larger RAW image files — make sure your CF card has plenty of room if you shoot with the D3X in 14-bit (rather than 12-bit) mode.

Nikon kept the same 51-point autofocus system with 3D focus tracking in the D3X that it used in the D3, D300, and D700. And in our tests, we saw very similar down the lights, the D3X’s AF prowess really emerged. Even at our test’s dimmest setting of EV -2 (about the brightness of a scene under a full moon), the D3X focused in less than 1 second.

Nikon also kept the same excellent 1,005-pixel 3D Color Matrix II metering system, which works with the AF system to help in tracking subjects during in the camera’s continuous AF tracking modes. You can choose from Matrix (Nikon’s version of evaluative), centerweighted, or spotmetering. The latter grants you a tight spot of about 1.5 percent in the center of the frame. (The Canon offers a wider 2.4 percent spot.)

We found Nikon’s Matrix metering effective in determining the best exposure for a given scene. The system compares the current scene with a database of images in the camera to determine, for instance, if you’re shooting a portrait, or if the scene is backlit, or if the exposure should be something other than the standard reading. It generally works well. There will always be situations in which you’ll want to use exposure compensation, but more often than not, over a wide variety of shooting conditions, Matrix metering makes the right decisions.

Like Canon’s 1Ds Mark III, the Nikon D3X has a rugged body made of magnesium alloy with weathersealing to withstand rough shooting environments. Since the body is nearly identical to the older D3, it doesn’t vibrate the sensor to shake dust away. But an integrated vertical grip makes portrait shooting more comfortable, and plenty of buttons let you change settings without having to dig into the menus. And if you’re already familiar with pro Nikon bodies, you’ll feel right at home with the D3X.

A dial to the left of the prism controls the drive mode, while three buttons above the dial let you control flash, bracketing, and shutter/aperture lock. Exposure compensation and mode buttons sit just behind the shutter button.

On the back, three buttons below the 3-inch 920,000-dot LCD give quick access to ISO, image quality settings, and white balance. These, along with switches for metering and AF modes, create a very efficient interface for photographers who need to change a setting at a moment’s notice.

As usual with a pro DSLR, you won’t find a pop-up flash. Of course, the D3X has a hot-shoe and is compatible with all of Nikon’s current flashes, including the new SB-900 Speedlight ($400, street).

Two CompactFlash slots provide plenty of storage. Good thing, because with the D3X’s huge RAW files, you’ll need all the storage you can get. You can configure the dual slots as redundant backup, or one for RAW files and the other for JPEGs (handy in simultaneous capture), or so that the camera moves to the second slot once the first card is full.

And there’s plenty of connectivity, too. Besides the usual composite video-out and Hi-Speed USB 2.0 terminals, there’s a power input, a PC flash-sync terminal, and a 10-pin remote terminal, which lets you use Nikon’s GP-1 ($210, street) GPS adapter to automatically add location and universal time code data to your images. Cool!

Why? First, its super-high resolution, which will let you print really big photos. Second, its super-tough build, complete with dust- and weathersealing, as well as an integrated vertical grip, important to pros. Finally, its super performance in low light, with high sensitivity, low noise, and fast autofocus in the dimmest conditions.

Especially for pros and enthusiasts who are already invested in the Nikon system, and can afford the eight grand, this is one smart big-ticket purchase.

Canon EOS-1Ds Mark III($6,550, street, body only)
Sure, it can’t match the D3X’s 24.5MP, but at 21.1MP, this Canon’s no slouch. Add to that a fast autofocus system, accurate colors, and extremely low noise at lower ISOs, and you’ve got a very compelling camera. If you mainly shoot in a studio environment, where you won’t need high ISOs, the 1Ds Mark III might be the camera for you — especially if you already have an arsenal of Canon glass. If your shooting is more varied, the D3X’s versatility may tip the scales in its favor. After all, the D3X nearly matches or beats the Canon in most areas of performance, including the burst rate of 5 fps. But if you’re not already wedded to a brand, the Canon offers one big advantage: It costs about $1,500 less.

Sony Alpha 900 ($3,000, street, body only)
Although the A900 uses a very similar 24.6MP CMOS sensor for extremely high resolution, in other respects it’s a little unfair to compare it with the D3X. Sony doesn’t even call its flagship a pro camera. Die-hard pros may be disappointed in the A900’s relative lack of weathersealing, less-accurate colors, and high noise at ISO 6400. Unlike the Nikon, there’s no live view. But the Sony has plenty to recommend it, especially built-in, sensor-shifting image stabilization, which works with any lens you mount on the camera. The big, bright optical viewfinder, like the Nikon’s, is 100% accurate according to our tests, but the Sony’s offers slightly higher magnification. And then there’s the price, which makes it a much more affordable option than the D3X for anyone who wants a full-frame DSLR with the highest resolution on the market. 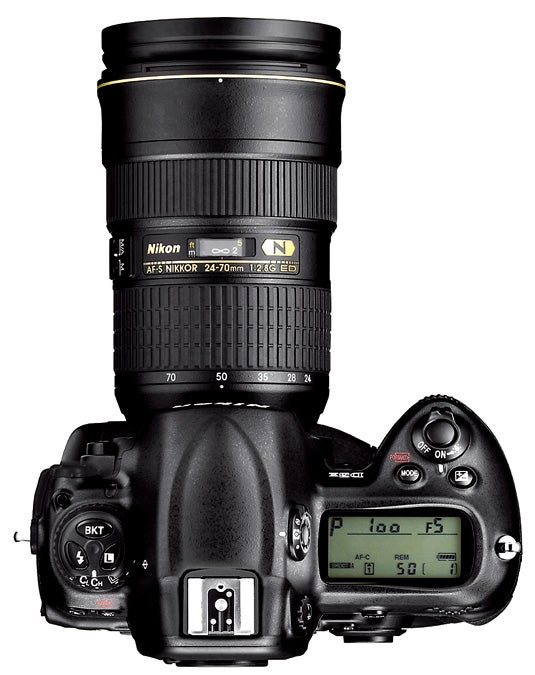 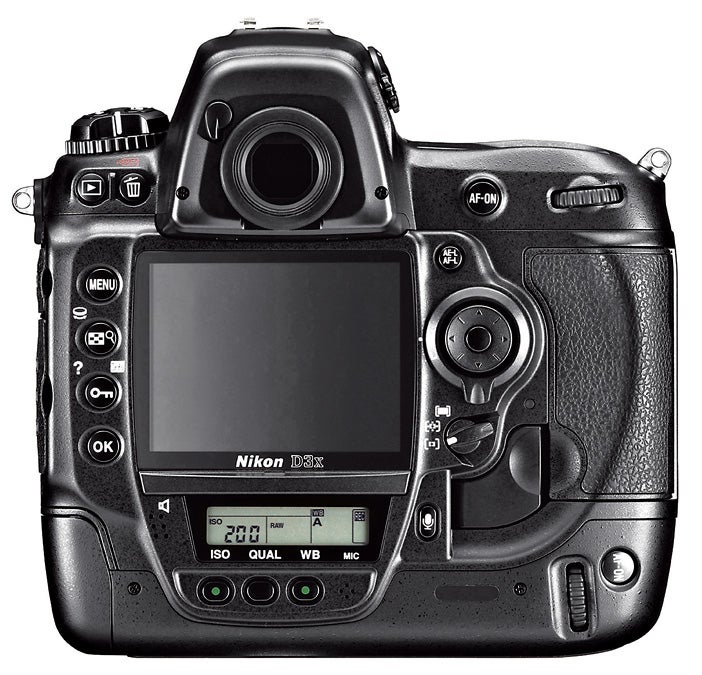 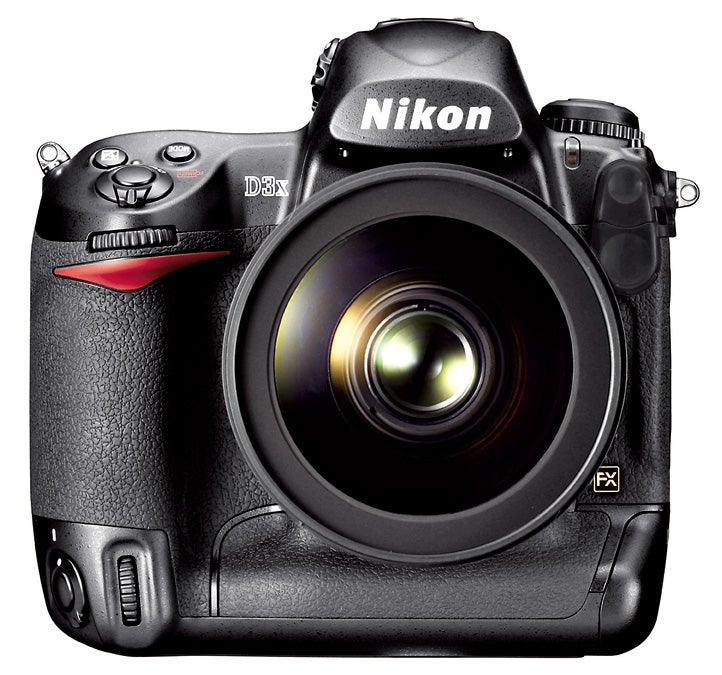