With the broadest zoom range of any interchangeable DSLR lens, this superzoom also packs a Vibration Compensation system. 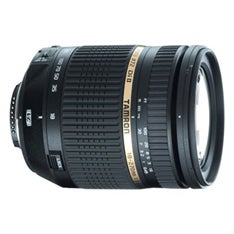 Made with three hybrid aspheric elements and two elements of low-dispersion glass, it’s available in Canon and Nikon mounts. The latter has a built-in motor, so it can be used on all Nikon bodies with sensors smaller than full-frame, including the D40 and D40X. (Why no other mounts? Most other DSLR bodies have built-in image stabilization, so they don’t need the VC in this Tamron.)

Slightly lighter than Canon’s and Sigma’s 18-200mm (11X) stabilized superzooms, the lens is very light considering that it reaches well over 400mm (in full-frame terms). While, when racked out, it’s almost an inch longer than Tamron’s nonstabilized 18-250mm, the new lens is still compact enough that it casts a shadow only at its widest settings (18-28mm) when used on a Nikon D90 with its built-in flash.

Well marked, with amply sized, very legible, white-on-black focusing and zoom scales, the lens has a half-inch-wide ring with an underdamped turning action and narrow turning radius for fast, if coarse, manual focusing. The zoom action is adequately damped, though slightly uneven, stiffening as you go out. Autofocus on the Nikon D90 was quiet, moderately fast, and accurate. There are three barrel switches: MF/AF, VC on/off, and a zoom lock at 18mm.

Optical bench tests for sharpness and contrast produced SQF numbers in the Excellent range at all tested focal lengths except 270mm, where they dipped into the Good range. The numbers were similar to those of most superzooms and almost identical to those of Tamron’s 18-250mm.

Light falloff was gone from the corners by f/5 at 18mm. At the other three zoom settings, we found no discernible vignetting at all. This is a noteworthy achievement compared with most of the competition, and it’s a noticeable improvement over the 18-250mm, which showed vignetting at every tested focal length.

Maximum magnification at the uniform close-focusing distance of approximately 15.7 inches ranged from 1:14 at 18mm to a high-powered 1:2.89 at 270mm — significantly stronger than Tamron’s published spec of 1:3.5.

Tests of the Vibration Compensation system found handholding gains of between 1.5 and 3 shutter speeds for three different testers. The results also suggested that, more than with most image-stabilized zooms, users will get the best VC performance from this lens by waiting a full second between shots.

With a 1-2-3 punch delivered by that unequaled zoom range, Vibration Compensation for handholding, and impressive macro and vignetting performances, this is arguably the single most useful lens available to sub-full-frame digital shooters. Autofocus, while not sluggish, is a little too slow for truly active subjects, and the softening at 270mm may be a deal-killer for photographers who need critically sharp tele images.

Most amateurs, however, could shoot for months, if not years, without ever needing or wanting another lens. You may never need a teleconverter or tripod, either!