Which CF Card Should I Buy?

When you're shooting RAW, you need a memory card big and fast enough to take on today's amazing DSLRs. 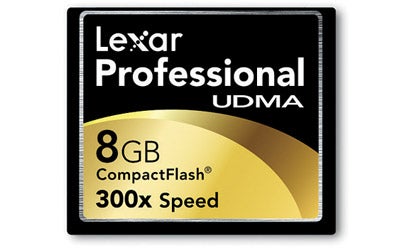 I just got a new DSLR and want to shoot lots of RAW photos. What sort of CompactFlash card works best? That’s easy — a big, fast one in the UDMA format. The problem: sorting the hype from the hard specs. Fortunately, all CF cards report size and speed the same way.

Shooting RAW gobbles memory like an Escalade drinks gas. So think gigs. The days of measuring capacity in megabytes (MB) are over. With 1GB equal to 1,000MB, a 1GB card holds about twice as much data as your old 512MB card. And bigger is better. An 8GB card in your camera is preferable to four 2GB cards in your bag.

CF card speed is rated in multiples of X, in which 1X equals 1.5KB/sec transfer. The higher the number, the faster the card. CF cards rated 266X (39MB/sec) and above use a new technology called UDMA. Right now, only a few pricey cameras can write at this speed. But the format will become more prevalent in DSLRs of all levels in the next few years.

Even if your camera can’t write at UDMA speeds, with a UDMA CF card you’ll never miss a shot — it can always keep up with the DSLR’s burst and buffer rates. It also will save you time when downloading images to your computer. An 8GB UDMA CF card running through a FireWire 800 UDMA CF reader can unload its photos to your hard drive in less than 4 minutes. That’s fast.

Want a bargain? You can get a Lexar Professional 8GB UDMA card plus Lexar FireWire 800 reader for about $230. The card bristles with software: Image Rescue 3, Backup n Sync, and Corel Paint Shop Pro X. So it’s a heck of a deal in big, fast CF cards.