Which Card Reader Should I Buy?

If each of your cameras take different kinds of memory cards, here's the reader for you. 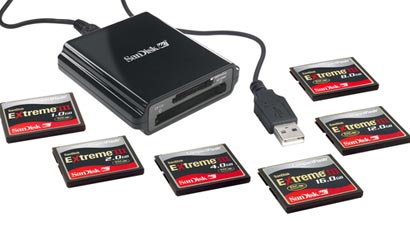 If each of your cameras take different kinds of memory cards, here’s the reader for you.

Q: I have a DSLR that uses CF cards, a point-and-shoot that takes SD cards, and a camera phone that uses MicroSD cards. My laptop has FireWire and USB 2.0 connectors, but I don’t want to attach my cameras directly and waste their batteries. What’s the best card reader for me?

A: If you also have cameras that use xD Picture Cards or older SmartMedia cards, our answer would be the Zio Dazzle Hi-Speed 10-in-1 USB 2.0 reader ($30, street). It handles most cards (including your MicroSD, using an SD adapter), but it’s not the fastest reader on the block, especially when fed the latest high-speed memory cards from Kingston, Lexar, SanDisk, and others.

Do you use Lexar Professional 80X CF cards with the LockTight feature? Then you’ll have to use a Lexar Professional card reader for them to work properly. Available in USB 2.0 or FireWire versions ($70, street), it’s stackable and works with most other CF cards.

For high-speed CF cards and nearly all SD, SDHC, MicroSD, MiniSD, and Memory Stick (including PRO Duo) cards, we recommend SanDisk’s Extreme USB 2.0 reader ($25, street). It supports the full read and write speeds of SanDisk’s Extreme III CF cards (up to 20MB/sec) and it will also read Extreme IV cards, albeit at Extreme III speeds. This reader is the fastest one we’ve found for Kingston’s 8GB 133X Ultimate CF card. And it ships with RescuePro software (for Windows XP), which recovers images from corrupt or erased cards. While it doesn’t accept xD Picture or older SmartMedia cards, it’s priced right for everything else.