In this battle of 300mm f/2.8 lenses, we compare Sigma's prime against its sibling fixed aperture zoom to see which one you'll want for your camera bag. 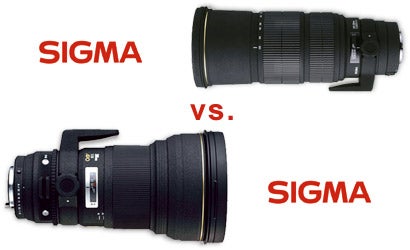 Ask just about any photographer what they most want in their camera bag, and odds are you’ll get a lot of requests for long, fast glass — like a 300mm f/2.8. We’re talking expensive, we’re talking big, and we’re talking heavy. We’re talking mortgage payments here in this class of lens.

Sigma has not one, but two 300mm f/2.8 lenses out there. Both are recent DG upgrades to existing lenses, meaning they’ve got coated optics to minimize flare and chromatic abberations on DSLRs. One’s a prime, and one’s a fixed aperture zoom — the only fixed aperture f/2.8 zoom that goes to 300mm, as far as we can tell.

These two telephoto siblings have a lot in common. They both feel great in the hand, have perfectly balanced tripod collars, weigh in at over five pounds, and are priced between $2,500 and $2,800, depending on the vendor. They are both full-frame lenses, meaning you can shoot in on either your APS-C sensor DSLR or your full-frame cameras such as the 5D and 35mm film SLRs. Neither has Image Stabilization, nor any focus limiters — probably to keep the overall costs down. But don’t think they are identical except that one zooms.

The zoom Sigma 120-300 f/2.8 EX APO DG IF HSM is 10.6 inches long without the lens hood and weighs in at 5.7 pounds. The lens features 18 elements in 16 groups to keep that constant aperture through the zoom range. There’s no drop-in filter, probably due to the internal focusing and zooming, but it will take gigantic 105mm filters in front of the lens. The zoom stops down with nine blades. The zoom is available in Canon AF, Nikon AF, and Sigma AF mounts. Street price is around $2,700 for Canon and Nikon, and a few hundred less for the Sigma AF version.

The prime Sigma f/2.8 EX DG APO HSM is 8.3 inches long without the lens hood, and weighs in at 5.3 pounds. It has 11 elements in nine groups and a drop-in 46mm filter. There are nine diaphragm blades here as well. Like the zoom, it’s available in Canon AF, Nikon AF, and Sigma AF mounts, and adds both Pentax AF and Sony/Minolta AF versions, as well — though these don’t have hypersonic motors, so the HSM is missing from the naming of these two versions. They sell for about $2,600, with the Sigma AF version again being a few hundred less.

(For simplicity’s sake, we’re dropping all the scrabble letters and we’ll be calling them “the prime” and “the zoom” for the rest of this piece.)

We took Canon versions of both lenses out and about for field testing, in follow-up to our lab reports from a few years back. These are virtually identical to their older counterparts, except for the new digitally coated optics and upgraded firmware. The majority of our field testing was shot with a single Canon EOS 1D Mark II N, but for our 100 percent pixels slides , we used a full-frame Canon EOS 5D to see edge-to-edge detail.

We’ll say this right up front: based on lab and field testing, the prime is a touch sharper than the zoom at 300mm. When the same test image at ISO 100 1/800 at f/2.8 was shot in RAW on the Canon EOS 5D and processed in Adobe Camera RAW by clicking the Auto button, the Prime image looked great straight away. The exact same parameters showed slightly softer edge detail and some chromatic tinges on the zoom image. But a little tweaking of sharpness and lens corrections in ACR cleaned up the zoom image enough to bring it closer to the prime photo. Part of the beauty of digital imaging in RAW is that software can fix some minor lens flaws to a point where all but the most discerning and critical photographers will be satisfied with the results.

Autofocus on the prime is very quick and usually quite accurate, even with moving subjects in AI Servo mode. In low-contrast scenes it slows down and searches a bit more, but we had good results with the prime under all sorts of lighting conditions. The zoom is usually tack-on and fast in bright, contrasty light, but works a little harder in dark, low-contrast scenes. The lack of a focus limiter on both lenses manifests itself in these low-light scenes, where a shorter throw before reverse would speed up the overall AF time across the board.

Both lenses have big, easy to grip manual focus rings that are well-damped with just enough resistance to suggest quality without feeling overly stiff. The huge zoom ring is right in front of the focusing ring on the zoom lens, and this also feels well-damped. But there’s no spacer or separation between the two, and on a few occasions we threw our shot out of focus while trying to zoom or zoomed when we were trying to tweak focus before we got the hang of it. Both have a top window showing focal distance, and neither has any depth of field markings. This is likely because a lot of the shots with this type of lens are going to be close to wide open, and critically sharp depth of field is pretty limited to exactly where you’re focused. Even stopped down to f/10, objects just a few feet off the focal distance begin to soften their edges — less so than wide open, but softer nonetheless.

Our field tests show that the prime 300mm f/2.8 is sharper and crisper than the zoom 120-300mm f/2.8 when shooting the same subject, although a bit of RAW tweaking can correct for the zoom’s slight flaws to the point where many a photographer would be content with the results. It adds a marginal amount of time to the RAW processing workflow, but just a few mouseclicks per image to sharpen the RAW file, and tweak the lens fringing settings to get the 120-300mm’s output similar to the primes.

So here’s the story thus far: The prime is a touch sharper, but the zoom is more versatile. For many a modern shooter who grew up on zooms, a prime requires some adjustment. You’ve got no zooming, but you do have feet. Want to loosen the shot? Back up ten feet. Tighten up the composition? Move closer! But that’s not always possible. Sometimes there’s a stadium wall or a building or a cliff restricting the photographer’s movements. That’s where zooming out (or in) comes in handy. You’ve got many more framing choices with a zoom, but there are tradeoffs. While the zoom is bigger and heavier, it offers a lot more versatility for the target market, which we think is mostly sports and wildlife photographers.

For sports and wildlife photographers, long, fast glass offers two serious creative and aesthetic advantages based on the optical physics of fast telephotos: action-freezing shutter speeds with extremely shallow depth of field at maximum aperture to isolate and separate the subject from the background.

If you drop down 100 millimeters to a 200mm focal length, there’s a great selection of amazing 70-200mm f/2.8 zooms available in all the AF mounts the Sigma 300mms are offered in. These are the smallest of the big lenses, and both Sigma 300mms are much bigger than this class of glass. For many a photographer, the step up to a 70-200mm f/2.8 lens from a variable aperture zoom is a milestone in their growth and dedication to quality optics to better excel at their craft.

In many ways, the Sigma zoom is a super-sized 70-200mm f/2.8. Let’s be honest: with telephoto zooms, no one’s buying for the wide end; it’s the reach you’re paying for. If you’ve been thinking about a 70-200mm f/2.8 but haven’t yet made the plunge, and pondered if maybe you’d like even more reach than 200mm for those birds in the backyard or the outfielders on the local baseball diamond, you should give serious consideration to the Sigma 120-300mm f/2.8 zoom.

If you’ve got a quality 70-200mm f/2.8 in your bag, you’d be duplicating a good bit at the wide end with the Sigma zoom. Go for the prime. It’s a little sharper and a little faster in AF in both bright and dim conditions, and the difference between 200mm and 300mm, while not negligible, isn’t dramatic.

If you really want a 300mm f/2.8 but can’t totally break the bank, either of the Sigma 300mms won’t zap your savings account quite the way some of the competitors will. There are some trade-offs for the savings, such as no focus limiters or Image Stabilization — although this isn’t an issue for many Pentax and Sony shooters with sensor-shift stabilized cameras — but both the zoom and the prime have a lot to offer at this focal length for significantly less than some of the OEM competition. 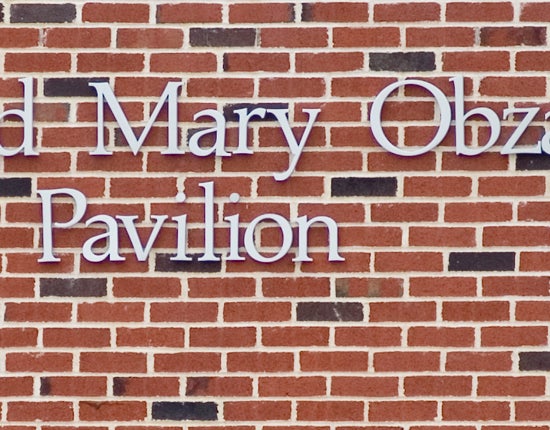 This is a 100% view of the pixel detail with Sigma 300mm f/2.8 Prime on the Canon 5D straight from Adobe Camera RAW. No resampling, sharpening or any other image adjustments were applied to the image. 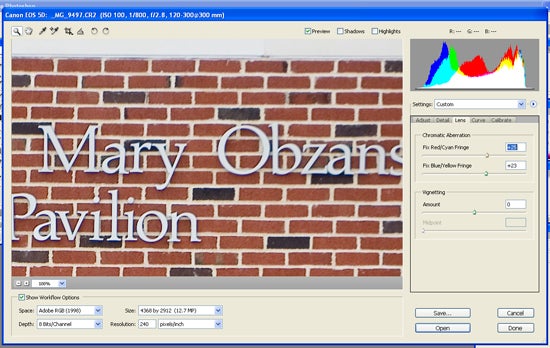 We opened the 120-300mm f/2.8 zoom RAW file and again clicked the Auto button. But then we cranked up the sharpness, luminance smoothing, and color noise reduction. 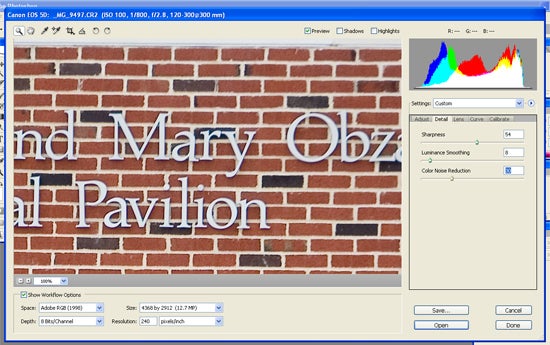 Then we adjusted the Chromatic Aberration sliders to clean up the fringing. 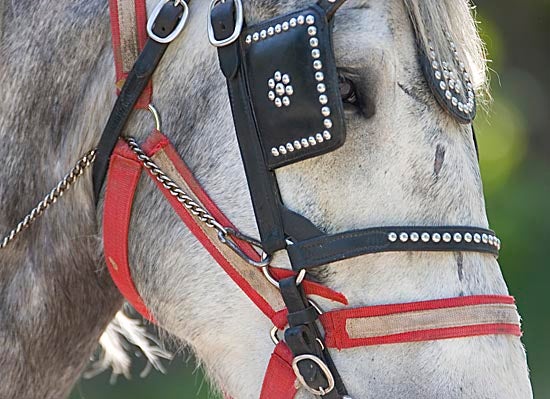 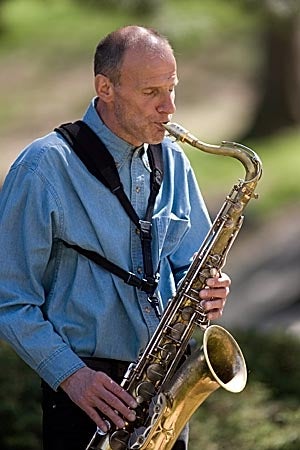 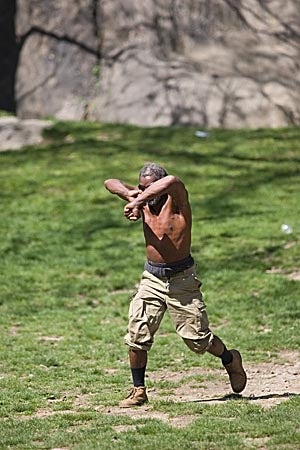 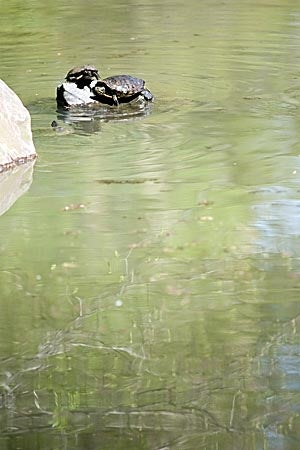 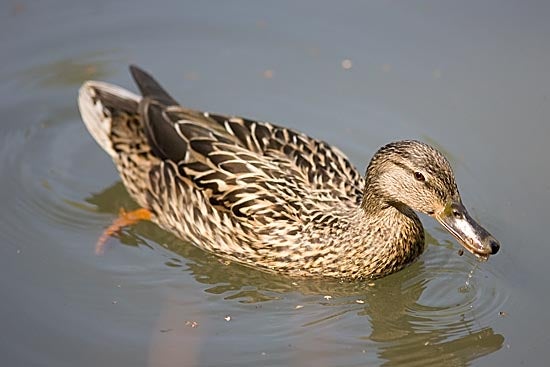 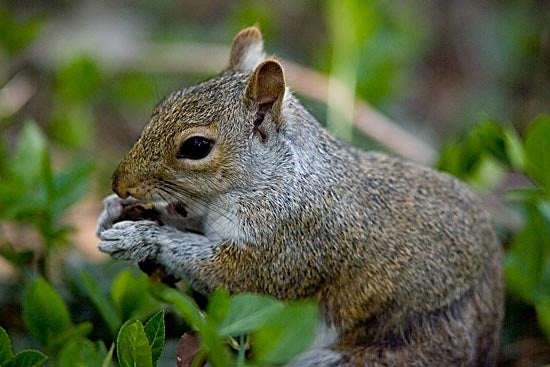 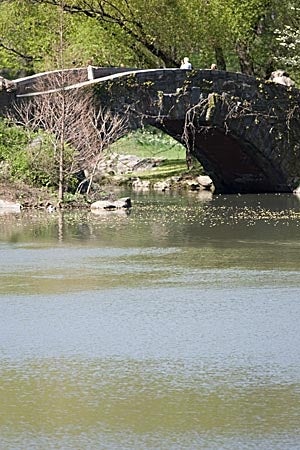 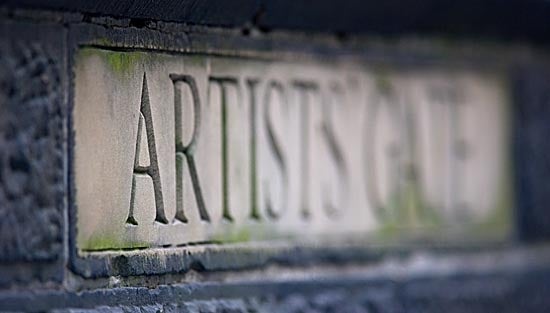 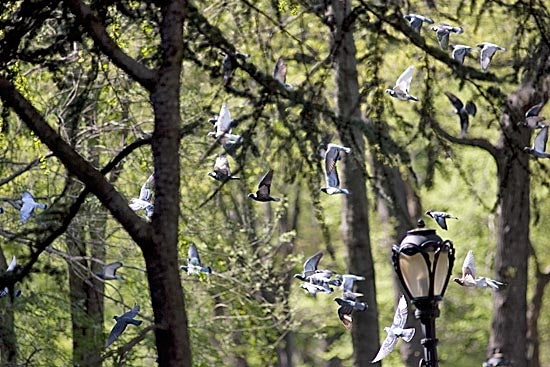