A lot of great glass has been introduced over the first three months of the year, including an increasing number of stabilized lenses. Here's a look at what's new for 2007. 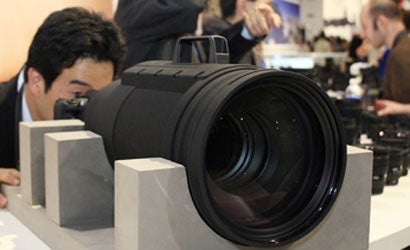 Additionally, there’s a new Pentax limited lens, the smc Pentax-DA 35mm F2.8 Macro Limited, which offers an angle of view equivalent to that of a 53.5mm lens on a 35mm film camera. According to Pentax, the Limited line will offer optics with outstanding image description performance. No date or price is yet available.

Nikon introduced one new zoom, with optical image stabilization and a silent wave motor, the 55-200mm f/4-5.6G IF-ED AF-S DX VR Zoom-Nikkor, made exclusively for Nikon digital SLRs that use the company’s DX sensor format. This looks like a lot of lens for the $249 MSRP.

Canon, on the other hand, introduced a top-of-the-line, second generation superwide zoom, the EF 16-35mm f/2.8L II USM lens, which is digitally optimized with anti-ghosting elements, aspherics, and Ultra-low dispersion elements. The L-line glass does not have a list price, but we’ll bet it streets around $1450 at introduction later this spring.

Leica and Panasonic have announced two new Four Thirds lenses: the Leica D Vario-Elmar 14-150mm/F3.5-5.6 ASPH/MEGA O.I.S. is an optically stabilized lens with a 35mm equivalent range of 28-300mm. The Leica D Summilux 25mm f/1.4 ASPH is equivalent to a 50mm on the 35mm standard, and should be a very sharp standard lens for the Four Thirds system cameras. No price or date yet available for these lenses.

Tamron rounds out this wrap-up with two interesting offerings for this company, a 70-200mm f/2.8 DI LD MACRO, which appears built to pro-level expectations. It also has macro capabilities to 1:3.1, which is unusual in this class. No date or price is yet available on this one. Tamron has also introduced the company’s first optically stabilized lens, the Tamron 28-300mm f/3.5-6.3 XR DI VC LD. The VC stands for “Vibration Compensation”, and it is described as “triaxial.” It is a full-frame lens, so it will work on a Canon 5D DSLR, or any film-based 35mm DLSR. No price or date yet available.

The addition of medium format LB3Gs allows medium-format studio, advertising, and landscape photographers to create images with the distinctive Lensbaby look that will meet client demands for large files and negatives, and opens up the Lensbaby world-view to a whole new breed of photographers. We think this is a daring move by Lensbabies, and we expect to start seeing more and more bent and twisted Lensbabies shots showing up in brochures and ad campaigns in the later part of the year.

Stay tuned in the coming weeks and months for full test reports on these lenses and more from the Pop Photo Lab.