The joys of shooting both wide and close, or from a distance, with Pentax's unique fisheye zoom lenses. 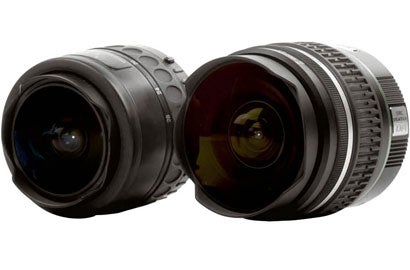 We’ve produced every possible useful interchangeable lens,” the head of a major camera and lens maker told me. “Name one we haven’t.” I immediately countered, “A fisheye zoom.”

He laughed and was joined by a number of the other top executives of the company. Who would want such a lens?

But one executive seemed more thoughtful. “Not a bad idea,” he whispered.

It’s been in and out of production over the years. But those who have used it often write me to express their enthusiasm.

Among its charms: No matter how many people are eating or celebrating around a circular table, I can get them all in the shot, somewhere between the 90 degrees of the 28mm and the 180 degrees of the 17mm fisheye setting.

And if I compose using the lines of the circular table carefully, the resulting pictures show little of the lens’ extra curvature. Moreover, if I see too much linear distortion around the picture edges, I can zoom in a trifle to eliminate it. No nonzoom fisheye can do this.

My secret for using the lens at close range? Zoom in tightly on the subject(s), while cropping out straight lines, thereby concealing the lens’ barrel distortion at its wider focal lengths.

If I can’t eliminate straight lines, I put them dead center, where they don’t bend. It’s a lot more challenging (and fun) than simply using the lens to make silly, weird pictures.

The Pentax fisheye zoom is but one of many unique lenses that suffer from lack of recognition (and less-than-stellar sales) for want of aggressive marketing and publicity. How many unique lenses do you see in ads from the big camera makers? Very few.

While they all advertise their cameras thoroughly, the poor individual lenses usually get short shrift. Independent lens makers such as Sigma, Tamron, and Tokina certainly make sure none of their lenses fall by the wayside through lack of visibility. Why don’t we hear more about Canon, Nikon, and Pentax glass?

One of my favorite general-purpose lenses, by another brand, had a conspicuous absence of much promotion and advertising aid. The 24-105mm f/3.5-4.5 Minolta zoom was an amazingly good general-purpose lens, unequalled in compactness and optical capability at a time when every other 35mm marque had buyers settling for 28-105mm lenses.

A number of independent lens makers, knowing a good thing when they saw it, tried to engineer their own 24-105mm lenses, but Minolta had the patents tied up good and tight. If Minolta had publicized the glories of this unique glass more effectively, it may have generated the “buzz” it deserved.

The 17-28mm Pentax fisheye zoom didn’t sell spectacularly well because, aside from its fan club of enthusiasts who had heard me praise it, who knew how useful the lens was?

Four years ago, Fumio Urano, Pentax’s president, asked me what lenses I thought Pentax should make with its new DA, digital-only mount. Naturally, I brought up the fisheye zoom, but in focal lengths appropriate for providing 90- to 180-degree coverage on an APS-sized digital sensor camera.

But, I added, it wouldn’t sell if it didn’t get some help from its friends and the manufacturer. Such a lens is just what Pentax produced and we tested in the June 2006 issue (“Fisheye View”).

Quite often, when going on a picture-taking jaunt, I’ll confine myself to taking just one unusual or unique lens. I took the older fisheye zoom to the open stands beneath Tokyo’s Yurakucho rail station.

Close-ups of the yakitori broiling on dozens of skewers over open fires with diners gobbling ought to make interesting fisheye pictures. Or so I thought.

Impossible! Even at the closest focus-ing distance of 18 inches, all seemed too far away throughout the zoom range. Yes, an 18-inch close-focusing distance seems pretty close-but not at wide angle! Thankfully, the new lens focuses much closer.

While examining it and complaining about this story at Pentax headquarters, I was more than a little surprised when Pentax’s Senior Executive Officer Ko Torigoe jumped up, twisted the new fisheye’s focusing ring to its minimum 5.5-inch focusing distance and thrust his face, nose first, to about one inch from the front of the lens. I took a picture. “Better?” he asked.