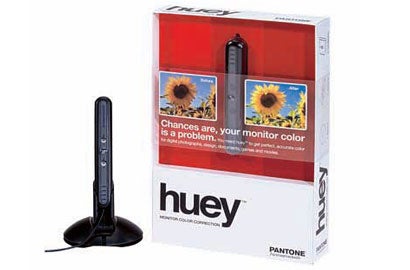 Calibrating and profiling your computer monitor used to require an advanced degree.

Now, the new Huey from Pantone/GretagMacbeth ($80, street) makes it a no-brainer. This light, compact, and inexpensive colorimeter could pay for itself by helping your printer match the image on your monitor, but it goes further.

The Huey also compensates for changes in the ambient light-great if you edit photos on a mobile computer or in an office with a view.

At first, I had difficulty getting the Huey to generate an accurate profile and monitor ambient light on a new Intel-based MacBook Pro running Apple’s OS X (10.6) operating system. (Pantone should have an update by the time you read this.)

After profiling, I placed the Huey in its stand (supplied) in front of my monitor, and set the control panel to monitor ambient light (you can also adjust the frequency of adjustment).

With any change in room brightness, the monitor adjusted to maintain the same relative contrast and color temperature. As a result, images didn’t shift color or contrast noticeably-a welcome improvement.

The Huey’s simplified set-up windows don’t include screen gamma or color temperature controls (it sets these automatically based on the operating system).

And I also wish the Huey operated wirelessly (via Bluetooth) instead of requiring a USB cable connection.

Still, it’s aimed at those who don’t know a screen gamma from a gamma ray, and its continuous ambient light compensation is worthwhile for anyone working in multiple locations or variable lighting conditions.