With infrared and ultraviolet capabilities, this ultrasensitive 12.3MP DSLR could prove to be a cop's best friend. 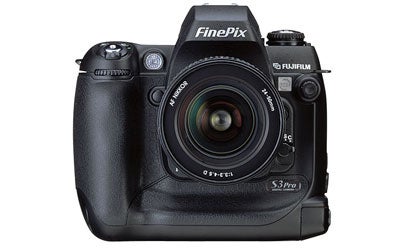 Fujifilm changed just one feature on its FinePix S3 Pro digital SLR of 2004. But that change makes the new, slightly renamed, FinePix S3 Pro UVIR ($1,800, body only) a whole new camera — with spectacular niche applications in infrared and ultraviolet photography. Simply by removing the IR/UV cutoff filter from in front of the 12.3MP sensor, Fujifilm engineers may have found a way to sell one of these cameras to every crime scene investigator and document forgery expert in the country! (And don’t forget fine-art photographers, who can now rid their refrigerators of all that IR film.)

We saw a demonstration of the S3 Pro UVIR’s ability to see beyond the visible spectrum and were extremely impressed by its new capabilities. (Old limitations, such as its sluggish burst mode and 1/2-EV exposure increments, still remain.)
The camera is essentially a Nikon body, compatible with all Nikon lenses. It also has a pop-up flash, allows D-TTL flash with older Nikon flash units (not the SB-600 or SB-800), and has most of the controls and features of the Nikon F100.

But the unique Super CCD SRII sensor and image processor are all Fuji. The sensor boasts incredible dynamic range, thanks to the use of two different sizes of pixels. It also provides a live LCD preview, albeit in black-and-white and lasting only 30 seconds.

Early in the original camera’s development, Fuji found that the Super CCD SRII is sensitive to infrared waves much longer and ultraviolet waves much shorter than those captured by normal CCD and CMOS sensors. Such sensitivity can create problems — making some edges look fuzzy and detecting the flaws beneath otherwise creamy skin, for instance. So Fuji’s engineers designed a special cutoff filter to counteract the sensitivity.

But while studio and outdoor shooters might want to stick to the visible light spectrum, many others need to go beyond it. Without the cutoff filter, the S3 Pro UVIR opens up new possibilities for artists, CSI photographers, and forgery experts.

By placing special opaque filters in front of the lens, visible light can be blocked, while IR and UV wavelengths are allowed to pass. In forensic work, photographers traditionally use infrared film, special lights, and a wide array of IR filters. For instance, one filter will reveal differences between inks used in forged and original documents, even when they appear identical in regular light.

Experts often have to shoot several dozen exposures with various filters and lighting setups, develop the film to see which combination came close, and then fine-tune the combination. This trial-and-error process can take days. But with the S3 Pro UVIR, a pro can get the same work done in less than an hour. That the camera’s live preview is b&w, rather than color, doesn’t matter in this case, since most IR films are monochrome.

Police investigators, using an external flash system and relatively low-quality lens (high-quality optics have coatings to absorb IR and UV), now can detect trace amounts of blood on clothing or at a crime scene — in real time.
Fine-art photographers have been using several compact and electronic-viewfinder digital camera models to make IR photos without film. But these cameras don’t have the range of controls, lens choices, and IR-wavelength sensitivity of the S3 Pro UVIR.

We can’t wait to experiment when we get a production unit, due out by the time you read this. For more details, see our Field Test and Image Quality Gallery. 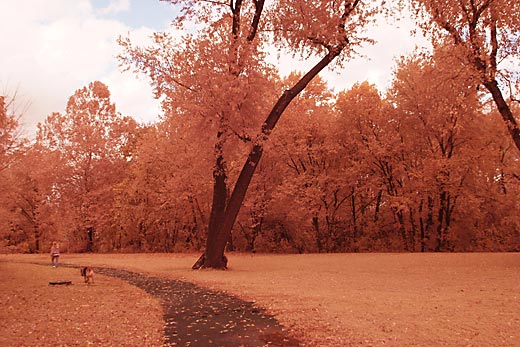 Color mode. No filters. 1/90 f/9.5 ISO 200 – In Color mode, the FujiFilm FinePix S3 Pro UVIR recorded the grass in the field and all the leaves as a rich reddish orange. Notice the slight reddishness on the edges of the clouds as well. 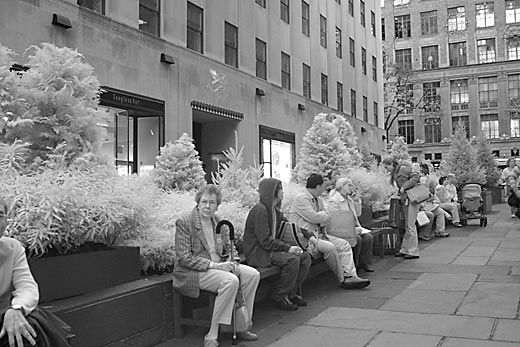