But has Pentax jammed too much into this 35mm mighty mite? 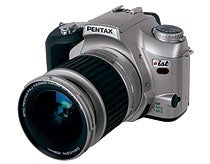 “Is that a piece of jewelry around your neck or a real SLR?” someone asked one day when we were shooting field tests on the street with the Pentax *ist. It was said in jest, but the *ist may be as close as we ever get to an SLR that falls into both camps. And though it’s a cute handful, is it a good camera?

Having wrung out a production unit for a few months, here’s the answer: In terms of operating convenience, the *ist is pretty sensational.

Sensational convenience? With how many other SLRs can you operate nearly every control without removing your fingers from the camera? Except for the AF/manual-focus switch and exposure mode dial, almost all essential controls are on the camera back. There are no black-on-black buttons or switches to cause confusion. All are black-on-chrome, and clearly identified. The large LCD is on the back, so you don’t need to view the top plate to check settings. By removing the LCD from the usual top-of-camera position, Pentax engineers have been able to shorten the camera body. They’ve also reversed film travel, placing the film chamber on the right side and running the film right to left. This creates a roomy film compartment in which the film need only be dropped and held by top spring tension-one of the simplest loading SLRs ever. The short film travel means 25 instead of 24 exposures, or 37 instead of 36 per roll (usually).

Is the *ist too small to be held comfortably? Both large- and small-handed testers on our team found it enjoyably holdable for both horizontal and vertical shots.

Most of our technical interest in the *ist centered on its unique 11-sensor autofocus system. Pentax SLRs previously lagged behind others in this area, lacking any cross sensors at all. But the *ist has an amply filled field of nine with two additional linear sensors at far right and left.

Looking through the *ist’s viewfinder (which has a slightly smaller magnification than other mirror-prism SLRs), you can easily see the entire picture area and LCD information panel, even if you wear eyeglasses. On the screen are 11 black sensor indicators plus a circle representing the spotmetering area. Using the rear four-way controller, you can let the camera select the AF point, select the focus point yourself, or switch to the central sensor. When the point locks onto a subject, it flashes red-not the wimpy short flash you see on other camera AF screens, but a bright light that often illuminates the surrounding area as well. We also found the audible focus-OK signal very useful when we were not paying attention to the red flashes. An LCD diagram shows the AF sensors in use.

AF was adequately fast, as was performance in low light. As with many compact AF SLRs, the *ist’s pop-up flash does two extra duties, preflashing to minimize redeye and acting as an autofocus aidlight. We found the subjects being photographed were often annoyed when they mistook these preflashes for the actual flash.

Our AF recommendations? When shooting action, use continuous autofocus with the camera selecting the AF point; use single focus and the center sensor for still scenes (when you can autofocus on the main subject), then recompose while holding the shutter release halfway down. We found the advantages of nine cross sensors most evident in fast-moving action scenes; the crosses locked onto subjects with far greater tenacity than could a mixture of crosses and single-line sensors, or purely single-line sensors. Such an advanced AF system on a camera at this price level is remarkable.

The *ist’s exposure system is quite comprehensive, with the traditional program (a smiling face on the mode dial), aperture- and shutter-priority autoexposure, and manual exposure. Unlike many other AF SLRs, evaluative metering, centerweighted, or spot can be had in all modes, but it’s too bad that the program mode isn’t shiftable. You cannot shift the exposure up or down to take advantage of a different shutter speed or aperture than what the program sets.

We’ve often written about the subject modes on cameras, which let you set exposure for what the camera considers best for portraits, scenics, close-ups, action, or night pictures; you do better determining your own exposure (except for night shots in which the long exposures with flash do come in handy). The green Auto Picture Mode goes one automatic step further. It picks and sets the subject mode depending upon subject distance and magnification. This process is fascinating to watch as the subject symbols light up differently, according to the picture-taking situation. This auto pic mode is great for tyros who know little about photography and are not interested in learning more. Our opinion, again: make your own exposures.

While some of the Pentax *ist’s custom functions have to do with changing the actions of particular switches and buttons, a number of them are of major import. CF 11 allows the film leader to remain out after rewinding-important if you intend to reuse an unfinished roll of film.

Camera shake at slow speeds, caused by rapid-return mirror movement, produces blurry pictures. So we were pleased that Custom Function 12 locks up the mirror when the self-timer is set to two sec instead of the usual 12. Two seconds is enough time to minimize mirror shake before exposure. Autofocus points and proper exposure with evaluative metering are not normally linked, but CF 3 automatically adjusts the exposure to the operating focus point, a useful function.

The built-in databack is both good and bad. While it’s a nice feature, the data mechanism is powered by the camera’s CR2 batteries. So guess what happens each time you change batteries? You lose date and time, and must set them again.

Databacks with their own slim lithium power cell are preferable, but they add cost, bulk, and weight.

Like almost all compact AF SLRs, the *ist is powered by two CR2 lithium batteries rather than larger, more powerful CR123As. For more power, attach the BG-20 battery grip, whose four AA cells boost the number of rolls shot per set of batteries by about 50 percent.

The Pentax *ist passed all its field tests with flying colors. The viewfinder LCD information panel is easily visible even in bright daylight when you keep your eye close to the comfortable, soft-rubber eyepiece. But we were surprised that the Pentax tripod socket isn’t centrally located, which may be a difficulty for those lining up the camera on a copystand or doing precision tripod work (such as mechanically stitching panoramics).

In our field tests, both print and slide film yielded well-exposed daylight, low-light, fill-flash, and flash-only shots. Unfortunately, there is no flash-OK indication in the viewfinder.

The Pentax *ist is a fun-to-use camera. It’s ultracompact, handsome, easy-to-handle, and full of features, including a sophisticated AF you’d expect in a much more expensive camera. The beauty of this camera is far more than skin deep.

The Pentax *ist vs. its competitors
Nikon N75 QD
($230 street, body only) Larger, heavier (with all-glass prism), almost as good-looking as Pentax, but not quite. Five AF sensors with one cross sensor. Controls not as convenient. LCD panel on top of camera. Lower top speed. Exposure and flash systems more comprehensive. Much greater lens choice, including Vibration Reduction lenses. No mirror lock-up.