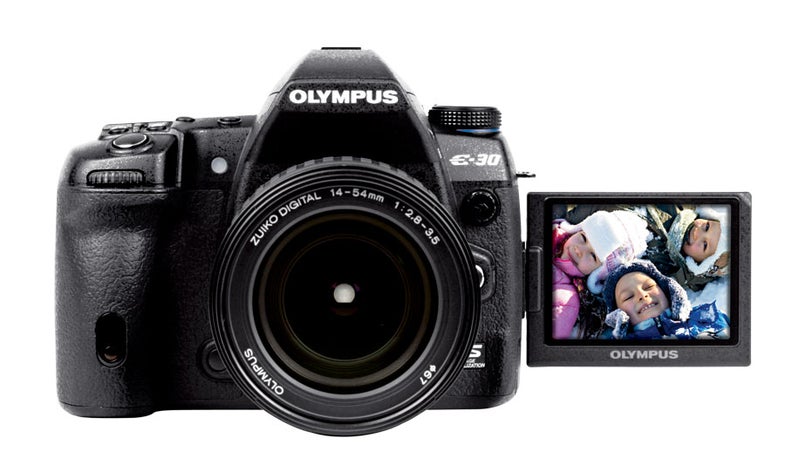 The new Olympus E-30 ($1,300, estimated street, body only) has six of these in its ample bag of tricks, along with some high-end capabilities inherited from the flagship Olympus E-3. It’s also the first Olympus DSLR to crack the 10-megapixel barrier, with a 12.3MP Live MOS sensor.

Positioned just below the E-3 in the Olympus lineup, the E-30 gets the sophisticated autofocus system of the top camera, with 11 twinned focusing points, as well as the 5-frames-per-second burst rate. It has an articulating (tilt and swivel) LCD monitor, too — but, at 2.7 inches, it’s bigger than the E-3’s 2.5-incher. The camera even takes the same optional HLD-4 vertical battery grip ($200, street) as the E-3.

What it doesn’t get from the E-3 is full battle-worthiness. The E-30’s body is reinforced polycarbonate, rather than magnesium alloy, and it lacks the weathersealing of the E-3. And while it has the same shutter speed range of the E-3 (60 to 1/8000 sec, with a top flash sync of 1/2 50 sec), the shutter is not rated for durability (common among consumer-level cameras), whereas the E-3’s has a 150,000-cycle rating.

The upside is that the E-30 is lighter and smaller than the E-3. We handled a preproduction model and were impressed with the fine ergonomics of the camera, the well-designed grip and finger rests. The E-30 also sports (yay!) two command dials rather than the single dial of the lower-rung Olympus E-520 and E-420.

What really makes the E-30 stand out in the lineup is the assortment of Art Filters (special effects applied to JPEGs on the fly), plus the best-designed multiple-exposure system we’ve seen so far in a DSLR.

Art Filters? These are: Soft Focus; Pale & Light Color (a pastel rendition); Light Tone (a high-key effect); Grainy Film, which, besides converting to grainy black-and-white, gives a high-contrast, lithographic look; Pin Hole, which vignettes edges and softens the image; and Pop Art, an oversaturated look that Olympus says expresses “the joyful, lighthearted feeling of the Pop Art style of the 1960s.”

If you’re thinking cheesy, well, yes. But the Art Filters are fun, and the less over-the-top ones, such as Pale & Light Color, yield pretty effects if used in moderation. (Wedding photographers, take note.) And since the E-30 can capture JPEGs and RAW simultaneously, you can always go back to a straight rendition if you decide the Grainy Film version of your elderly aunt really was a bad idea.

The multiple-exposure mode, for composite images, works through live view. It’s neat. Take a shot, and it’s displayed as a semi-transparent overlay on the live view, so you can accurately position an additional exposure. Combine up to four images, and the E-30 will automatically adjust their brightness. Wedding photographers will love this, too.

The new TruePic III+ image processor promises greater dynamic range than that of the E-3. A Digital Leveler displays sideways and fore-and-aft tilt, both in the viewfinder and on the live view screen. The E-30 includes the rest of the goodies we’ve come to expect in Olympus DSLRs: sensor-shift image stabilization (with two panning modes), self-cleaning sensor, wireless TTL control of multiple flashes via the pop-up unit, face detection, and thumbnail previews of the effects of various settings.