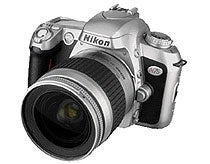 Are you an “entry-level photo enthusiast?” That’s the category Nikon has identified as the target audience for its new N75: a bit more advanced than a point-and-shooter, but a bit less advanced than the die-hard SLR type.

With due respect to the niche carvers at Nikon, the N75 is a camera clearly aimed at providing something for almost everybody, from total tyro through pro wannabe. Let’s explore this fundamental question: Can this jack-of-all-trades prove master of most?

What are the goods?
First, a review of the obvious points of the N75. The camera body is a direct descendant of the highly rated (and still in production) N65, Nikon’s most successful foray to date into the entry-level SLR category (owned for a long time by the Canon EOS Rebels). While the N75 is marginally smaller and lighter than the N65, it shares the same chassis, film drive, and basic control layout. Like the N65, it can accept Nikon G-series lenses (which lack mechanical aperture control) as well as virtually all Nikon CPU-type lenses. The N75 then adds these upgrades:

•Meter pattern: 25 segments in its Matrix metering pattern, versus the N65’s six.
•Autofocusing switch: A three-way switch plus jog dial on the back of the N75 alternates between autofocus modes and focusing points with a flick of the thumb-considerably easier than the N65’s clumsy button-plus-dial AF switching.
•AF-point indication: The focusing point chosen by either the camera or the user is highlighted in black directly on the focusing screen, and, in dim conditions, will illuminate in red. (The N65 uses small LCD icons below the screen.)
•Flash metering: The N75 uses 3D MultiSensor Balanced Fill-Flash (five-segment) as opposed to the plain Matrix Balanced Fill-Flash of the N65. Translation: The N75 takes subject distance into the equation for better foreground/background exposure balance. It also reads reflectivity of the scene with a monitor preflash, which helps adjust for very light or very dark flash-illuminated subjects.
•Continuous motor wind: Available in all modes, vs. solely in action mode in the N65. (The N65’s action framing rate, though, is a zippy 2.5 fps; the N75’s, 1.5 fps. Go figure.)
•Spotmeters: You can spotmeter at any of the five indicated focusing points.
•LCD panel illuminator
•Prewinding: We’re not sure if it’s an upgrade, but the N75 draws the full length of film out on loading, protecting the exposed film as it winds back into the cassette.
•Vertical grip/battery pack: An optional accessory for the N75 allows use of four AA batteries of any type.
•Glass prism: Yup, a pentaprism instead of the N65’s mirror prism. It’s needed for the AF-point indications.
•Custom functions: 12 in all, if you like this sort of thing.

Quite a list! To some, it even puts the N75 squarely in competition with the N80, Nikon’s next model up the ladder. But the N80, among other things, has a more sophisticated AF system that can “hand off” from one sensor to another as a subject moves across the frame.

Our field test findings
If you like the handling of the N65, you’ll like the N75’s even more. The contoured grip places your index finger nicely on the shutter button, and lines up your thumb right behind the command dial. The rear AF switches are within easy reach of your thumb. Holding the camera vertically is just as easy.

The AF controls are a real pleasure. The green-zone setting on the three-way switch lets the camera choose one of five cross-arrayed AF points, and it will always choose the closest subject it can read. (Nikon gives this the jawbreaking name Dynamic AF Mode with Closest-Subject Priority.) Flick the three-way switch one notch and the camera switches to central AF only. Flick the switch one more notch, and you can now pick the AF point yourself with the jog dial. It is easy to use, easy to understand, and the indication in the viewfinder makes it all the more obvious.

The autofocus will shift automatically from focus-priority to continuous, although in practice, we found the camera to be heavily biased toward locking focus and keeping it there. If you want to ensure that continuous AF tracks a moving subject, your best bet is to switch to the Action mode.

Exposure modes are selected with a left-hand dial. The green auto zone is absolute point-and-shoot. Flash pops up automatically when needed, and there are exactly two user overrides: You can either cancel the anti-redeye lamp, or turn off the flash.

Program mode lets you turn flash on or off, set second-curtain or slow-sync flash, exposure compensation, auto bracket, or shift to equivalent exposures. The rest of the standard exposure and scene modes work as expected, so let’s turn our attention to this camera’s specific abilities and idiosyncrasies.

Put the camera on manual exposure, and the metering switches from Matrix evaluative to centerweighted. The theory is that manual shooters know what they want to meter, and how to meter it (a midtone area, for example, or a moderate highlight for shooting slides). Similarly, the camera switches to centerweighted pattern when you use the AE- lock button in autoexposure mode. (AE lock is a press-and-hold affair; we would have been happier if you could just press and release to hold a reading.)

All well and good, but what if you want AE lock to hold the Matrix exposure? That’s what custom function number 7 is for. CF 7 can also be set to make AE lock take spotmeter readings. If you select your own AF point, the spotmeter sensitivity will move with it. (It makes for a busy thumb.)

If the spotmetering procedure sounds like a bit of a pain to you, we agree. This makes for our sternest criticism of the N75’s controls: we’d prefer a separate three-way switch to let shooters choose meter pattern as they wish. (Maybe that’s for the N77.5?)

Autofocusing proved generally quite swift, as long as a detail matched a sensor’s orientation (which wasn’t hard-the vertical and horizontal sensors have good oblique sensitivity as well). Our tests showed that AF in low light was somewhat faster than the N65’s. In real-life shooting (including our toughest test target, a black cat in a dim room), low-light focusing was boosted greatly by the incandescent focus-aid lamp. Its intrusiveness, unfortunately, is a consequence of its effectiveness. (You can zap the lamp with a custom function.)

But are 25 meter segments better than six? While the N75’s metering worked fine in all sorts of tricky situations like backlight and hard sidelight, so did the N65’s. We made comparison shots on slide film with the N75 and N65 and found that in most front-lit or moderately sidelit shots, the two cameras yielded identical or nearly identical exposures on Matrix. With backlighting, though, the N75 often gave more exposure-sometimes over a stop. Which was better? Well, there’s no “right” exposure for backlight to begin with; if you like lighter detail in backlit subjects, the N75’s Matrix metering may be more to your liking.

The N75’s built-in flash worked superbly. In a typical instance, it provided just the right combo of flash and ambient exposure for a sidelit human subject in dark, nonreflective clothing against a light background-exactly the sort of scene that can result in under/overexposure with autoflash. In comparison shots, we found the N75 did a better job than the N65 in maintaining accurate tonality in very light or very dark foreground subjects.

And the bottom line…
Is the N75 worth the $70 premium over the N65? In our view, absolutely. The AF system is clear and convenient, the flash system is terrific, and you get spotmetering (even if you do have to jump through hoops to get it). Overall, it’s a great grab-and-go camera with a very high fun factor. The N75 should appeal to everyone, from the almost beginner to the F100 shooter looking for a bargain backup.

How does the N75 stack up against competition?

Canon Rebel Ti ($310, street):
About 50 bucks cheaper, with excellent handling and autofocus, and an upgrade to a stainless-steel lensmount, the Rebel Ti should prove a tough competitor to the N75. Higher framing rate, plus faster and more sensitive AF, although we found the AF-point indications baffling at times. Lacks spotmeter; N75’s metering range and flash capability are comparable.

Minolta Maxxum 5 ($260, street):
The bargain of the bunch with 28-80mm zoom, the Maxxum 5 is also very tough competition, with AF about equal in sophistication to the Rebel Ti’s, plus 3 fps motor rate, faster top shutter speed, and more custom functions than the N75. Has flash-OK indication and spotmeter, but no diopter adjustment. Nikon wins on handling convenience, wider lens selection.