Could this camera be the coal in the 20D's stocking? 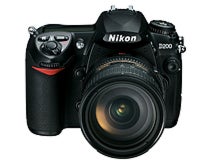 This morning, Nikon announced its latest DSLR, called the D200. For an estimated street price of $1,699, it offers a 10.2 (effective) megapixel, APS-sized CCD sensor housed in a weather-sealed, magnesium-alloy chassis, which sports a 2.5-inch, 230,000-pixel LCD on back. The camera can capture up to 37 JPEG, or 22 NEF RAW, images at a rate of up to 5 frames per second. And, since it doesn’t have an integrated vertical grip, its size and weight are a manageable 5.5×4.4×2.9-inches and 1lb 13oz (without battery, memory card, body cap, or monitor cover).

According to Nikon, the viewfinder on the D200 has a 95 percent accuracy, and .94x magnification. The camera also has an 11-point AF system, which the company says is sensitive down to -1 EV, and can be combined into 7 points to help in tracking moving subjects. Like Nikon’s pro-level D2x. the D200 offers 3D Color Matrix Metering II, which can compare measured metering data with a built-in database from over 30,000 images to determine a proper exposure. Plus, via the D200’s built-in flash, it can wirelessly control up to two groups of Nikon I-TTL Speedlights, including on-the-fly flash compensation settings.

Also like its pro-level cousin, Nikon will offer a wireless transmitter for the D200. Scheduled for Spring of 2006, the WT-3 transmitter will be able to transfer images over a wireless 802.11b/g Wi-Fi network.

The EN-EL3e battery that ships with the D200 will not be compatible with any other Nikon camera. And, because of Nikon’s new “smart” battery technology, the D200 will not be able to work with any third-party batteries. On the plus side, Nikon says the battery will provide up to 1,800 images per charge, according to the CIPA standard. Plus, the optional MB-D200 battery pack provides room for up to two more EN-El3e’s or six AA batteries, along with a vertical grip, shutter relase, and control knob.