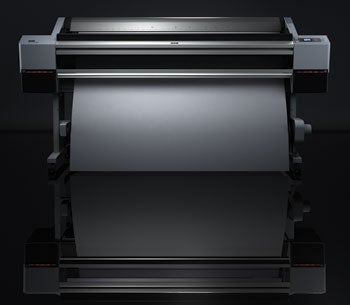 Epson has added a new printer and three all-in-ones to its line of inkjet devices that use Durabrite Ultra pigment-based inks. The printers use three individual color ink cartridges in addition to black ink, and are designed to produce high-quality images on both photo and plain paper. The all-in-one devices also offer functions such as copying, scanning, and faxing.

The 8.6-pound C120 printer uses dual black ink cartridges to achieve fast printing speeds, and offers a Quiet Print Mode to keep printer noise to a minimum. The C120 outputs photos at sizes up to 8×10.

Epson’s new all-in-one lineup starts with the 12.8-pound CX7400, which scans and copies in addition to printing. The device includes memory card slots for transferring photos, as well as automatic photo enhancement tools that adjust exposure, sharpen images, and use face-detection technology to distinguish faces from scenery and enhance skin tones and scenery separately. The CX7400 prints color photos at sizes up to 8×10. It also provides software for restoring vibrancy to scanned color prints.

At the top of the new all-in-one lineup, the 16.8-pound Stylus CX9400Fax builds on the CX8400’s feature set with fax capabilities, including color photo faxing, as well as an automatic document feeder and support for legal-size copying and faxing. It features a USB port for printing directly from PictBridge-compatible cameras, and offers an index sheet feature that lets users select images to print, paper size, and paper type by marking and scanning a paper index sheet.

All three printers support a wide range of media, including papers as thick as 1.5mm. Both rolls and sheets are supported. Inks are available in individual 110 and 220 milliliter cartridges. A ninth Matte Black ink can be substituted for the ink set’s Photo Black cartridge. The Stylus Pro printers perform automatic head alignment and cleaning.

Epson has introduced a new Stylus Pro inkjet printer for professional use that outputs 2880×1440 dpi prints in sizes as wide as 64 inches. The Epson Stylus Pro 11880 uses a newly developed nine-channel printer head. The MicroPiezo TFP head incorporates 360 nozzles per inch, as opposed to the 180 on lower-end Epson pro printers, and its use of nine channels obviates cartridge-switching to select Matte Black or Photo Black inks. The head’s ink-repelling coating also promises to significantly reduce nozzle clogging.

The 11880 supports a wide range of media in rolls and sheets, including papers as thick as 1.5mm. The printer has built-in automatic media-cutting, head alignment, and head-cleaning systems. It also includes a media bar code tracking and identification system designed to track media types, remaining length, and width, and other media-related data. Inks are available in individual 700 milliliter cartridges.

The 11880 will be available in October 2007 for a $14,995 retail price. It comes with a stand and an automatic take-up reel system. The printer will also be sold with a ColorBurst RIP for a price that has not yet been announced. Photographers who don’t have fifteen thousand dollars burning a hole in their pockets can expect numerous professional labs to provide print services using the 11880.