The Canon Selphy CP740 outputs dye-sub prints while the all-in-one Pixma MP470 and MP210 combine a photo inkjet printer with a flatbed scanner, as well as copying functions. 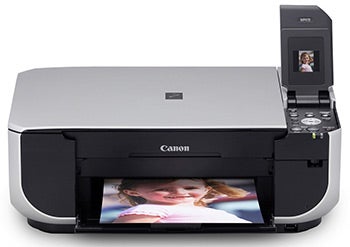 Canon has added the Selphy CP740 to its line of compact dye-sub printers. The 2.1-pound model outputs 4×6, 4×8, and smaller prints, and features a two-inch LCD, memory card slots, and a retractable USB cable for connecting to a computer. It can receive images from USB-connected Pictbridge-compatible cameras, and from camera phones via an optional Bluetooth adapter.

Canon has introduced two new all-in-one devices that combine printing, scanning, and copying functions. The Pixma MP470 and MP210 both output documents and 4800×1200 color photo prints at sizes up to 8×10. The printers use a two-cartridge, four-color system with dye-based ChromaLife100 inks, and both feature built-in memory card slots, as well as Pictbridge support for direct printing via USB. The MP470 supports an optional Bluetooth adapter for receiving images wirelessly, and incorporates a 1.8-inch LCD.

The two devices offer Canon’s new AutoImage Fix feature, which automatically analyzes photographs and matches them to a scene mode such as Portrait or Scenery, then optimizes the images accordingly. They also employ a new Quick Start feature for powering up almost instantly.