Now that you've got that new DSLR, how about some glass to go with it? Here's a quick roundup of the latest zooms and primes hitting store shelves. 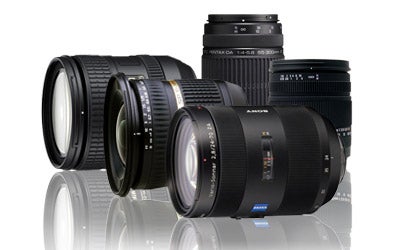 Lens makers opened the flood gates in late 2007 and early 2008, announcing brand-new glass, expanding the camera compatibility of existing lenses, and finally putting a release date on some long-awaited optics. The new lenses have already started arriving in stores, and will continue to trickle out in a steady stream over the next several months.

If you like to buy from third-party lens makers, who generally charge less for their optics than camera manufacturers, there are plenty of new options for you. Sigma, Tamron, and Tokina have come out with both new lens designs and numerous versions of existing lenses with new mounts and motors to make them compatible with a greater range of cameras. One nice thing about buying a lens that is newly available for your camera but has been around for a while for other brands is that it will probably have been widely tried, tested, and reviewed already.

Most of the new lenses are of course zooms, but there are quite a few primes on the list too. Although Nikon has a 60mm prime coming out, the new models tend to fall on the very wide and telephoto ends of the optical spectrum, with Pentax and Tokina unveiling two noticeably similar 35mm lenses (both companies are owned by Hoya, so draw your own conclusions) and Canon presenting its long-anticipated 800mm and 200mm optics. Pentax takes the prize for offering the most new primes, adding 200mm and 300mm lenses in addition to the wide glass.

There are also some notable new specialty lenses coming to market this year: Nikon added a wide tilt-shift lens with automatic exposure support, and has plans to announce two additional tilt-shift models later this year. Sigma says it will finally ship its ginormous 200-500mm/400-1000mm lens later in the year. Sunex has also come out with a 5.6mm fisheye lens for Nikon and Canon SLRs with APS-C-size sensors. With lens conversion factors, its 35mm-equivalent focal length will still fall under 9mm, and the Sunex is priced to be a little more affordable than similar fisheye options from Sigma.

Below you’ll find a list of the new lenses that are just hitting the shelves or will become available soon. With 2008 just getting started, be sure to check our Photo News frequently for the complete scoop on the latest gadgets as they’re announced, and stay tuned to our Tests & Reviews area, where we’ll post our complete evaluations after running new lenses through the rigors of the Pop Photo Lab.

(Note: All focal lengths listed are for 35mm-size image frames. If your digital SLR does not have a full-frame sensor, apply the appropriate lens conversion factor to the focal length to see what its 35mm equivalent focal length is.)