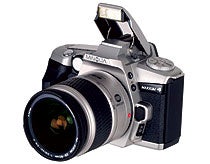 Very simply put, the Minolta Maxxum 4 is a Maxxum 5 (tested February 2002) but with a few features missing-and others altered-in an identical camera body. Missing are a depth-of-field preview, the Minolta Eye-start system, which automatically activates the camera when it’s held to your eye, and the ability to use various Minolta flashes at high speeds. Other changes are diminutions: a three-sensor AF system from seven, 1/2000-sec top speed and 1/90-sec X sync instead of 1/4000-sec with 1/125-sec X sync, a polycarbonate lensmount instead of metal (plastic lensmounts have worked well on all budget SLRs using them), 1.7 fps continuous film advance rather than 3 fps, and 12 custom features rather than 14. Missing functions? The Eye-start system, and the duration of the LED display in the viewfinder.

By “doing without” the above list, you save $30 compared to the Maxxum 5. But the long list of features remaining is sufficiently impressive to consider this the test of a far more expensive SLR than one costing $165. And we’ve left out some Maxxum 4 features we liked, such as the camera-back lock, which prevents you from inadvertently opening the camera unless it’s empty or the film is safely rewound.

The principal loss we feel is in the AF system. The Maxxum 5 had a stellar one, with one cross and six linear sensors that light individually when operating. That has been simplified to three in the Maxxum 4-one cross, right, and left linear sensors that do not light up. The Maxxum 5’s greater AF area coverage provides superior autofocus performance with action subjects. The Maxxum 4’s system is best used (if the subject isn’t central) by focusing directly on the principal subject, holding focus and recomposing before shooting.

Our summary of the Maxxum 5 applies to the Maxxum 4 (aside from the AF system change): “outstanding simplicity of controls-the camera is a winner.”

• Pentax ZX-60 ($160 street): Only single central linear AF sensor sensitive to subjects with vertical lines; no shutter speed or aperture numerals in the finder, (only symbols), although LCD panel on body has full info; no release-priority exposure; two-segment TTL exposure metering, but no spotmeter or flash-OK signal in finder; 1 fps film advance.