How to make a single studio light do the job of two -- and make your portraits pop. 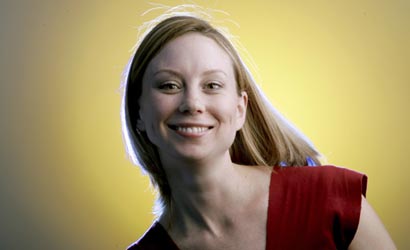 The late, great studio guru Dean Collins pulled many rabbits out of his lighting hat, but this trick attributed to him took my breath away: He made a single light produce two contrasting colors simultaneously, each aimed in a separate and discrete direction, with no significant cross-contamination.The beauty of this technique: it lets you make what appears to be three-light-location portraits from a very portable two-light kit.

The secret? Acetate gels. As the photo below shows, you take an acetate sheet and tape the ends to make a tube with a circumference slightly larger than your bare-bulb light head (strobe or tungsten; no reflector). Cap one end of the tube with a second gel of a different color, and slide the open side of the tube over the light head. Voilà, a “tube light.”

The diagram below shows how to deploy a single tube light as both a yellow background and blue accent light, while using a main light and reflector on your subject.

When I tried this recently, it took me almost an hour to produce the portrait shown here, setting it up light-by-light. (But, because I noted the relative distances, camera, and light settings, doing it again should be a snap.)

If you try Collins’ trick, beware of two pitfalls that tripped me up: My blue accent light, when cranked up high enough to create a bold edge, caused flare that muddied the model’s skin tones. A yellow gel over the main light compensated for it. (An easier solution might have been to choose a rim light color that’s compatible with human skin tones, such as yellow or pink.) Also, nicks and crimps in the acetate tube cast shadows across the background. I smoothed them out using Adobe Photoshop and learned my lesson: Handle gels with care.

• If you select your acetate sheets from the opposite ends of the color spectrum, your background and subject will separate more effectively. Use a cool color (blue, green, cyan) on the backdrop and a warm tone (yellow, orange, red) for the accent.
• Position the main light and its reflector with care. Flag or baffle the main light’s output so none of it can strike and desaturate the backdrop. Likewise, aim the fill reflector so that neither the background nor rim light can reflect off its panel and back onto your subject.

Rear light (1) pops through paper, clad in a two-tone acetate tube (2). The softboxed main light (3) strikes the subject (4) and bounces off a white reflector (5) to fill. A black gobo flag (6) prevents it from striking the backdrop.