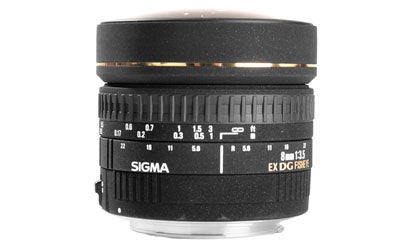 An updated version of Sigma’s 8mm f/4 spherical fisheye, this is the field’s widest circular fisheye with autofocus. It’s also among the last Sigma film-era lenses to be upgraded with coatings that suppress reflections from digital sensors (“DG”). It captures a 180-degree field of view, with exaggerated perspective and dramatic linear distortion, especially along the frame edges. For full-circle images, you need a full-frame film or digital SLR; APS-scaled sensors crop into the top and bottom of the frame when the camera is oriented horizontally.

About average in size and weight by modern fisheye standards, the lens is all metal. The nicely damped manual-focus ring turns smoothly. AF action on the Canon EOS 30D was fast and quiet. Like Sigma’s earlier 8mm f/4, the new f/3.5 has a spring-loaded filter holder inside the lensmount that accepts gelatin filters that you cut with the help of a supplied template. It also has an unusual hood-like filter holder that slides over the front of the barrel, accepts standard 72mm filters, and has a felt lining to control flare and reflections. Because of the lens’ extreme angle of view, using this filter holder causes marginal yet noticeable vignetting. And if you use a built-in flash, the lens casts a relatively large shadow.

The magnification ratio was an impressive 1:4.38 at the very tight close-focusing distance of 5.12 inches, compared with 6.5 feet for the earlier lens. Such minimal focusing distances make for stunning perspective distortion, with foreground elements exploding in size relative to a very distant-seeming background. Due to their extreme angle of view and exaggerated linear curvature, fisheye lenses don’t lend themselves to optical bench and wall-target tests. So we can’t comment with precision on resolution, except to note that the center areas of field test images were acceptably sharp and contrasty.

This unusual lens could make an enjoyable and, for pros, competitively significant addition to an optical arsenal. It visually distorts relative distance to put extra emphasis on a foreground subject, and its extreme barrel distortion makes rectilinear objects bow out as if they’re ready to burst. Need to make an otherwise mundane subject visually interesting? This is your tool.