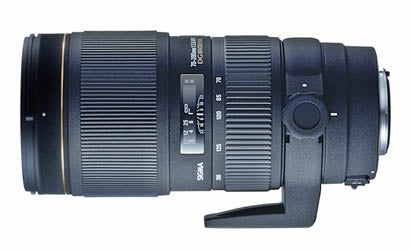 In testing, the newcomer fared well on POP PHOTO’s optical bench, delivering a better-than-spec 1:3.3 maximum magnification (Sigma claims 1:3.5), and superior distortion control: Slight barrel at the wide end, and Sight pincushion distortion at the longer focal lengths – a major improvement over the earlier 70-200mm. Like most high-speed lenses, it’s both large (over 10 inches long, with hood) and heavy (3 lbs, 2 oz.).

The bright f/2.8 maxiumum aperture suits it to a wide range of applications, including portraiture, sports, and, of course, low-light work. Its uniform close-focusing distance of just under 40 inches, its 1:3.26 maximum magnification ratio, and ultra silent HSM AF motor should make this lens a hit among nature and wildlife close-up shooters, too.

In the box are a removable tripod collar, petal-style lens hood, and a padded carrying case. The lens, already in stores, is selling for approximately $889, or about $50 more than the 70-200mm it’s replacing.

For complete lab test results, including the somewhat surprising SQF numbers, get your hands on the October 2006 issue of Popular Photography and Imaging, on newsstands in early September.