Few lenses made for the digital arena can deliver the creamy defocused backgrounds that are possible with this f/1.4. 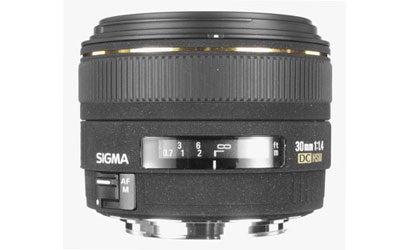 Originally published October 2005.
WHAT YOU NEED TO KNOW:

Because it covers less than the full 35mm frame, you would expect this digital lens to be smaller than filmspecific 35mm f/1.4 lenses. In fact, it’s considerably larger. (Pentax’s 50mm f/1.4, for example, is nearly half the weight, at 0.49 vs. 0.93 pound) Why the difference? Credit Sigma’s advanced, gearless ringtype HSM AF motor. Most 50mm f/1.4’s either have no USM/HSM motor or utilize the micro (or “pencil”) type, which uses a single gear. The Sigma’s gearless ringtype is quieter (virtually silent), and allows manual touch-up focus in the AF mode, something micro motors don’t. We were also impressed with this lens’ AF speed.

SQF data were in the excellent range for all apertures, with slight barrel distortion (0.78%), according to our DxO Analyzer 2.0 tests — about average for 30mm. Light falloff was gone by f/4, also average for the class. The close-focus distance was a satisfying 15.7 inches with a 1:10.2 magnification ratio.

Few lenses made for the digital arena can deliver the creamy defocused backgrounds that are possible with this f/1.4. If that look is important to your product, nature, or portrait photography, you should check it out. Of course, that f/1.4 maximum aperture also lets you shoot in a wider range of available light, sans tripod or flash. Try that with most digital-only lenses.