How to reach out and adjust your subject while shooting with this exceptionally close-focusing macro. 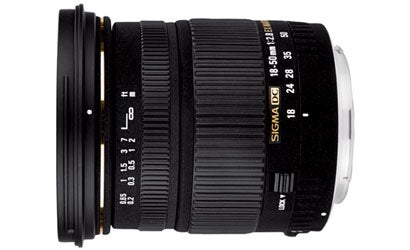 With Sigma’s new 18-50mm f/2.8 macro ($420, estimated street), we jog past another milestone: This was the industry’s first digital-only lens to be released in a secondgeneration version. The closest focusing of any Sigma zoom, this 30-85mm (equivalent, with our test camera’s 1.6X lens factor) features a wider barrel and larger filter size, and much closer focusing (from 7.25 inches, rather than 11.25 inches) than the 18-50mm it replaces, at about the same price.

Attractively finished in Sigma’s matte-black “Pro” surfacing, the lens offers ribbed and rubberized zoom and manual-focus rings, and is well-marked with easily legible focusing, zoom, and macro scales. Internal focusing with a non-rotating front element, the lens can’t be focused manually in AF mode. In MF mode, the action is smooth, but slightly underdamped, while zooming is both well-damped and even. Autofocusing on our test camera (Canon EOS Digital Rebel XTi) was rapid, quiet, and sure.

As expected, SQF tests found sharpness and contrast in the Excellent range at all focal lengths. DxO Analyzer 2.0 tests showed barrel distortion in the Visible range at 18mm (0.44%), and Imperceptible pincushion distortion at 28mm (0.03%) and 50mm (0.08%) — all satisfying results. In the macro range (10 inches at 50mm), barrel distortion jumped up into the Slight range (0.30%) — something of a surprise, as distortion usually drops at closer focusing distances. Light falloff was gone from the corners by f/3.5 at 18mm and 50mm. At 28mm, there was no falloff. This and the distortion numbers represent remarkable improvements over the earlier 18-50mm. (That lens, for example, vignetted between f/4 and f/5.6 at all focal lengths.) The new lens’ maximum magnification ratios at the uniform close-focus distance of approximately 7.25 inches ranged from 1:4.96 at 18mm to 1:2.59 at 50mm. This is an unusual degree of magnifying power, especially at the wide end.

For tabletop shooters who like to reach out from the camera position to reposition or otherwise manipulate their subject, this 1:3 macro is probably the closestfocusing lens in its class. In all, it’s a stellar performer, and significantly better by virtually all optical benchmarks than its predecessor, or, for that matter, competitors such as Nikon’s comparable 17-55mm f/2.8 ($1,200, street).