The optical image stabilizer is just one of the reasons to love this new zoom for Canon, Nikon and Sigma DSLRs. 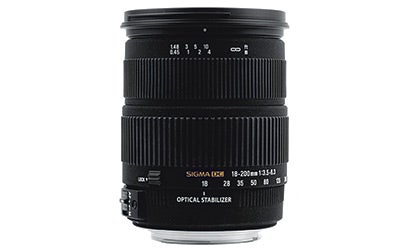 Sigma’s long-awaited, second Optical Stabilizer (OS) lens ($549, street) is an 11.1X digital-only superzoom with one SLD and three aspheric elements. A 29-320mm equivalent, it follows Sigma’s first OS lens, an 80-400mm f/4.5-5.6 ($999, street), by more than four years, and outdoes its predecessor with a sophisticated new autopanning sensor that detects extended lateral movement, then engages only the vertical stabilizer to allow blur where you want it.

Average in weight and size, the body is polycarbonate and the lensmount is metal. Focus and zoom rings are clad in ribbed rubber. The manual-focus action is somewhat underdamped, and the turning radius is unusually short — so short that the digits of the distance scales are jammed together and not easily deciphered. But the macro scale on the extended barrel is a snap to read. The zoom ring turns stiffly enough to make the zoom lock unnecessary. Autofocus is moderately fast and somewhat noisy on our test camera, the Canon EOS Digital Rebel XT. The lens cast no shadow at any focal length when used sans hood with the Rebel’s built-in flash.

SQF results showed Excellent sharpness and contrast at the four tested focal lengths. This beats most of the Sigma’s superzoom competition, which usually dips into the Very Good and Good ranges at the long end.

At the uniform close-focus distance of approximately 14.25 inches, maximum magnification ratios ranged from 1:12.6 at 18mm to a powerful 1:3 at 200mm. This is higher magnification than Sigma’s published spec of 1:3.9.

Finally, our DxO blur tests of the Optical Stabilizer system at 200mm found a 2- to 3-stop gain in sharp shutter speeds in the hands of three different photographers.

If you want an optically stabilized superzoom, your choices are the Canon 28-300mm, the Nikon 18-200mm or this Sigma — at least until Tamron’s new lens hits the shelves. In the meantime, the Sigma, which comes in only three mounts — Canon, Nikon, and Sigma — saves you more than $1,000 over the Canon, and costs hundreds less than the Nikon. By the way, if this lens is anything like the Sigma 80-400mm OS zoom, which is chronically out of stock, it could be hard to find. So if you want it and you see it, pounce.