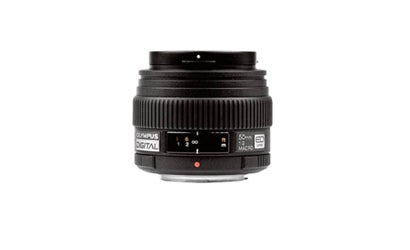 This is the second macro lens for Olympus’s Four Thirds digital system, and while it lacks the 1:1 magnifying power of the earlier 35mm f/3.5 macro Zuiko, at f/2.0, it’s much faster. Given the 2X 35mm lens factor on all Olympus DSLRs, the 50mm macro has a 100mm equivalent field of view — more traditional in macro.
HANDS ON: Unusually light and compact for an f/2 macro lens, it appears rugged, with a stippled, matte-black surface. Its broad focusing ring is encircled by a furrowed, rubbery material for excellent finger purchase. Subject distance scales (feet in orange, meters in white), behind a plastic window, are large and easily legible. The extremely well-damped manual-focusing action has a pleasing drag; AF action is rapid and sure, though by no means silent.

IN THE LAB: SQF data were in the Excellent range, indicating superior sharpness and desirable contrast characteristics. At normal focusing distances, DxO Analyzer 2.0 testing found Imperceptible (0.05%) barrel distortion — an outstanding performance — and light falloff that left the corners by f/2.8, which is also well above average. At the closest focusing distance of 9.75 inches, its maximum magnification ratio was 1:1.6, also excellent and significantly better than Olympus’s published spec of 1:2. In the macro focusing range, DxO testing found barrel distortion increased into the Slight range (0.14%), but light falloff performance improved: There was none even at maximum aperture.
CONCLUSION: A medium telephoto macro lens in the mold of the famous film-era 90mm f/2 Zuiko macro — which it resembles optically and in price — this lens performs extremely strongly. It’s well-suited to low-light work, portraiture, and, of course, close-ups. Plus, it’s the lightest f/2 true macro we’ve ever seen.