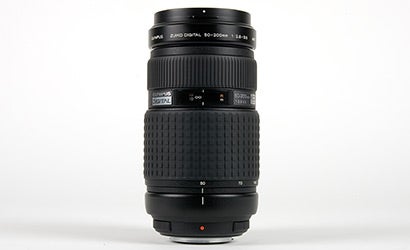 HANDS ON: Heavy (not surprising for a lens this long and fast), the Zuiko sports a generously broad, knurled, and rubber-clad zoom ring with a relatively long turning radius and slightly stiff action. The ribbed and rubberized manual-focusing ring is well damped and has no stops at the beginning or end of the focusing range. The lens also has a removable tripod collar. The AF action on our test camera (the Olympus E-510) was quiet and accurate, though slow by today’s standards. Almost 9 inches long when racked out to 200mm, the lens surprised us by casting no shadow when used with the camera’s built-in flash.

IN THE LAB: SQF tests found Excellent sharpness and contrast at four tested focal lengths — laudable, as nearly all similarly long tele zooms (such as the Sigma 50-150mm f/2.8) dip into the Very Good range at the longest focal lengths. DxO Analyzer 2.0 tests found Slight barrel distortion at 50mm (0.12%), and Slight pincushion distortion at 100mm, 150mm, and 200mm (0.12%, 0.15%, 0.14%, respectively) — peerless performance. Light falloff left the corners by f/5 at all focal lengths except 50mm, where we found none at all. At the uniform close-focusing distance of about 45 inches, maximum magnification ratios ranged from 1:16.28 at 50mm to a macro-worthy 1:4.07 at 200mm.

CONCLUSIONS: Its high-quality materials and superior optics (including three ED elements for controlling chromatic aberration) recommend this lens to serious shooters. Its ample reach and high speed place it among the most attractive lenses for sports and wildlife enthusiasts who use Olympus and Panasonic DSLRs. Outdoor shooters will prize its superior O-ring protection against dust and moisture.