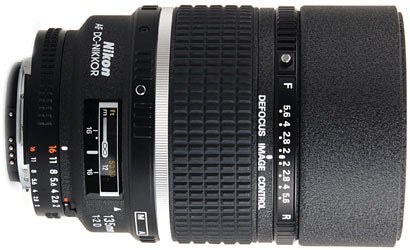 Both of the DCs are topdrawer portrait lenses that offer Nikon shooters the ability to make out-of-focus areas appear softer by strategically introducing spherical aberration to just the defocused areas. (Sharp areas of the scene are not affected.)

This softening, called DC for Defocus Control, is especially useful when specular highlights in a defocused fore- or background are bright enough to draw attention from a portrait subject. Because smaller apertures suppress spherical aberration, defocus control is only available from f/2 through f/5.6.

The lens seems slightly heavy for a 135mm f/2. Weighing about 2 ounces more than Sony’s 135mm f/2.8, it’s nearly a pound heavier than the Canon softfocusing 135mm f/2.8. Finished in Nikon’s black crinkle coating, it also has a built-in telescoping lenshood and a generously broad manualfocusing ring that’s both rubberized and knurled. The MF/AF switch is a rotating, lockable collar.

AF action was fast and quiet. Physically, the most unusual thing here is the lens’ lockable frontbarrel DC aperture ring. It has two opposing scales (both f/2 through f/5.6), one for adjusting foreground defocus (the F scale), the other for background defocus (R, for Rear).

For Defocus Control to work, you must select the appropriate DC scale (F or R), and its aperture must match the shooting aperture. If there’s a discrepancy between the two, overall softness results. The wider the deviation, the softer the image will become.

Our SQF tests of the lens in its normal, non- DC mode, found sharpness and contrast in the Excellent range for all apertures and magnifications. DxO Analyzer tests found barrel distortion in the Imperceptible range (0.03%) — an excellent performance. Light falloff was gone from the corners by f/2.4, a surprisingly good result.

The maximum magnification ratio came in at 1:6.71 at the closefocusing distance of 42 inches — just about the perfect distance for a portrait lens. It lets the photographer get close enough for normal conversation when making headshots, but not too close.

With Defocus Control on, our test images showed not only a shift in focus, along with a slight overall lowering of contrast. (Much of the time, lower contrast is desirable in a portrait.) The overall DC effect is a slightly softer, even creamier state of defocus, clearly an improvement. Depending on the relative distances between camera, foreground, subject, and background, plus the working aperture, the differences between DC and non-DC images can be extremely subtle.

Would professional portraitists appreciate the softer fore- and backgrounds? Probably. Would their clients? The most discerning certainly would.