The most compact M-series lens holds up in court. 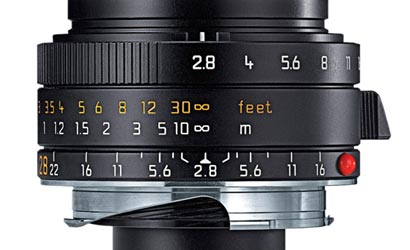 Leica’s new full-frame, M-series wide-angle is a 37mm equivalent when mounted on the M8 digital rangefinder. It’s the most compact of all M-series lenses — small enough, in fact, that with the lenshood removed, it blocks only a little bit of the active finder area. This $1,495 28mm’s most unusual feature is the new “6-bit code” engraved into the bayonet flange. It joins the much-admired Leica 28mm f/2 Summicron, which we called “unsurpassed” in our July 2002 test report.

Extremely light and compact, the lens reflects Leica’s traditionally high production quality: all-metal, with engraved focusing, aperture, and depth-of-field scales; and a finely machined focusing collar. This focuses easily, thanks to the traditional Leica finger cradle below the lens, but the turning action, while smooth, went from stiff to loose as focus approached infinity. On its bayonet flange are six elliptical shapes (the 6-bit code), which the camera uses to build EXIF data, among other functions.

SQF numbers were Excellent, indicating flawless sharpness and contrast. In DxO Analyzer 2.0 tests with the lens mounted on the Leica M8, distortion control was also stellar, with Imperceptible pincushion distortion (0.05%). There was no measurable light falloff in corners. The maximum magnification ratio at the close-focus distance of 26.25 inches was 1:19 — disappointing but much more powerful than the Summicron.

Neither as fast nor as sharp as the Summicron, this Elmarit has its own strengths, including improved distortion and vignetting control. It’s also more compact and half as expensive.