One of the first Zeiss lenses made for Nikon DSLRs, this optic is everything you'd expect from the legendary name. 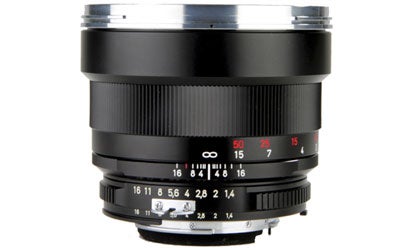 We’ve been waiting a year, but at last Carl Zeiss is unrolling its ZF series of Nikon F-mount manual-focus T* lenses, made by Cosina in Japan to Zeiss specifications. We tested what we think is the best ZF for portraits, the 85mm f/1.4 Planar T*. At $1,300 (street), it’s expensive, but it offers a few advantages.

The 85mm Planar is one of six new Nikonmount Zeiss models to be released this year, and more may be announced soon. All cover the 35mm format and have Aperture Indexed exposure control for Nikon film and digital SLRs that support it. (For most shooters, this means aperture-priority and manual exposure. If your camera doesn’t support AI exposure control, you’re stuck with meterless manual.)

Unusually heavy, the lens weighs about the same as Nikon’s comparable 85mm f/1.4D AF Nikkor ($1,025, street). Its bulk is due to the extra glass and all-metal construction — even the flocking-lined sunshade is heavy metal. The barrel sports a satiny matte finish and finely ribbed focus and aperture rings. The extra-large focusing ring has a very smooth, slightly overdamped turning action, with an unusually long turning radius for very fine focusing. Aperture, depth-of-field, and focusing scales are well marked.

SQF performance was in the Excellent range at all apertures and magnifications. It’s among the most distortion-free lenses we’ve ever seen — as measured in DxO Analyzer 2.0 tests, distortion was virtually nonexistent (0.02% pincushion). Light falloff was gone from the corners by f/2, also a strong performance. Only its magnifying power left something to be desired: The maximum magnification ratio was a lackluster 1:9.5 at the minimum focusing distance of 38 inches.

This sharp and nondistorting optic could give any commercial studio an edge over the competition. On a DSLR, it’s one of the fastest short teles made for the Nikon system, and while pricey, it could prove invaluable for low-light or active subjects.