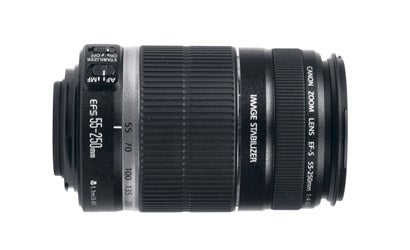 Not actually paired in a kit with Canon’s 18-55mm f/3.5-5.6 IS starter lens (yet), this is the system’s de facto kit telezoom. It’s squarely targeted at intermediate DSLR shooters who feel hemmed in by the 18-55mm and crave something longer. While most comparable digital tele-zooms that start at 55mm go to only 200mm (i.e., the Nikon, Sigma, and Tamron), Canon reaches out to 250mm.

This lens replaces the 55-200mm full-framer, a late film-era optic, and boasts a new optical design incorporating a UD element for controlling color fringing and a simpler, less costly IS system. The IS mechanism (the same as in the 18-55mm IS lens) is claimed to produce up to 4 additional stops of handheld sharpness in the 55-250mm. This is the first IS system for Canon that autodetects panning and limits its shake control to the vertical axis.

A bit heavier and longer than the non-IS 55-200mm that it replaces, this lens is still compact enough to throw no shadow at any focal length when used with the Rebel XTi’s built-in flash — surprising for a zoom that extends to the equivalent of 400mm.

Both zoom and focusing rings are rubberized, ribbed, generously sized, and smooth-turning. The AF action is fast and accurate with minimal searching and, by non-USM standards, relatively quiet (again on the Rebel XTi).

A natural for globe-trotting vacationers and soccer parents, this is the obvious second lens for Canon EOS 40D and Rebel XSi owners. Clearly it and the 18-55mm IS make an attractive team that promises sharp pictures in dicey light across an amply wide 13.9X zoom range. And you can’t beat that price.