This full-frame image-stabilized zoom does double duty as the kit lens for the Canon EOS 40D. 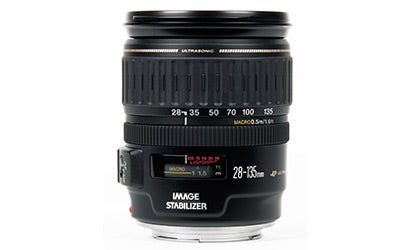 As noted in our original test (June 1998), the lens is bulky for its class, handsomely finished in matte black, with finger-friendly zoom and focusing rings. Turning action is adequate. And we still find the AF motor eerily silent.

In our new DxO blur factor tests, the IS gave our three testers 1.5 to 2.5 stops of extra handholdable sharpness, not a top performance by today’s standards. This first-generation mechanism is also exclusively dual-axis, so it can’t be used while panning.

Sharpness? As in its full-frame tests, the lens produced SQF numbers in the Excellent range at the three tested focal lengths. Surprisingly, the new numbers obtained from the image circle’s central “sweet spot” were slightly less impressive. The reason may be that the lens isn’t digitally optimized to transmit light perpendicularly to the 40D sensor’s microlenses or to suppress internal reflections off the sensor’s surface — which can compromise sharpness and contrast in a digital system.

Though starting to show its age, this zoom is a solid choice, especially at this price.

*Not available due to instrument limitation.