The latest version of Canon's ultrawide lens gives you bigger performance at a smaller price. 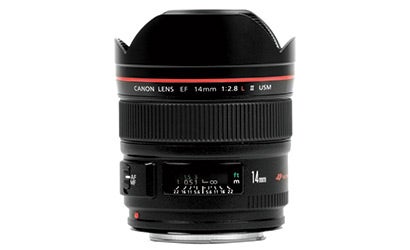 A full-frame 14mm f/2.8 has been an anchor of Canon’s premier L-series lens line for a quarter-century. This new upgrade, Version II ($2,199, street), has a second aspheric element and two elements of ultra-low-dispersion glass. Coatings to suppress reflections from a digital sensor are also new; so are gaskets and seals for better dust and moisture resistance. Equal to a 21mm on a DSLR with an APS-sized sensor, it has a near-fisheye 114-degree angle of view. That width, along with well-controlled distortion, made the previous version popular with architectural and editorial shooters, despite its high price ($2,900) and so-so sharpness (the earlier lens scored an Average rating in our SQF tests — unusual for such pricey glass).

Some 3 ounces heavier than its predecessor, this lens is bulky; its bulging front element is partially protected by a nonremovable lenshood. It has a very smooth-turning MF ring, extensive depth-of-field scale, and fast, accurate AF on our Canon EOS 5D.

DxO Analyzer 2.0 distortion tests found only Slight barrel distortion (0.27%), remarkable for so wide a lens. Close-focusing? Vastly improved, with about 2 inches shaved from the close-focusing distance (now 7.5 inches) for a notable 1:5.7 maximum magnification ratio (it was 1:9). Due to the extreme angle of view, we couldn’t use our standard target for testing edge falloff. But SQF tests show sharpness soaring into the Excellent range — bravo!

With its improved close-focusing, this lens offers new possibilities for exploring differences in scale and depth. Architectural shooters will be impressed by its visibly improved sharpness. While its price is still high, clearly so is its value.