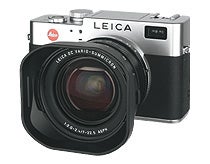 Go digital for a grand less than an M7

Massive bricklike body?? We’re sure Leicaphiles everywhere will do a double take (as we did) when they lay their eyes and mitts on this BIG interpretation of the classic Leica rangefinder. And then comes the triple take when they raise the Digilux 2 to eye level, because this is not your Uncle Bertholdt’s rangefinder-it’s an electronic-viewfinder digicam.

The new Digilux 2 ($1,850 street) indeed looks as if the controls from a classic mechanical camera were grafted onto it: rotary shutter-speed dial, plus lens rings for aperture, zooming, and manual focus. Many other functions are accessed by dials, lever switches, or buttons, rather than multiple branching menus.

But in operation, this is no retro replica. The camera powers up fully in about one second. A button lets you switch between the EVF and the massive LCD screen; both are topnotch. The 235,000-pixel EVF is about medium-grained, but very sharp and bright, with almost no jumpiness. The 2.5-inch monitor is gorgeous-very fine-grained, with excellent color. It makes reviewing pictures a pleasure, and the camera has both quick-review and quick-delete buttons. Twirl the back control dial and the image will be magnified up to 8X (equivalent to viewing a section of an 11.5×15.5-inch blowup).

Pick up the camera, and the first thing you’ll notice is its bulk and heft (although in comparison to many current digital SLRs, it might be considered quite svelte). All of our testers, even our smallest-handed one, liked the handling of the camera.

Size does have its advantages. The back dials, buttons, and levers are well-spaced, but still within easy reach of the thumb. The battery, a big slug of a Li-ion rechargeable, has serious stamina: our lab fired off over 1,400 shots, half with flash, on one charge.

The big LCD monitor also allows for very readable menus-some of the biggest lettering we’ve ever seen. Anyone should be able to read the menus without their reading glasses or bifocals.

Exposure control is very similar to the intuitive two-dial system of the Pentax ZX-series film SLRs. Set both shutter dial and aperture ring to A, and the camera operates on program auto. With the shutter on auto and the aperture ring set to an f-stop, you get aperture-priority auto. Do the reverse, and you get shutter-priority auto.

Take both dials off A and you get metered manual. A linear scale, graduated in 1¼3-steps, appears in the finder or on the screen. Simple and neat.

The back control dial adds extra convenience to settings. In program, the dial provides program shift. Press the EV button, and the dial will set exposure compensation, again using the on-screen scale. It works the same way for autobracketing and flash-exposure compensation-yes, the Digilux 2 provides variable flash output, ±2 EV in 1¼3-EV steps.

Speaking of the flash, it does a neat trick. Once you deploy the flash with the release button, you can snap it back down at an angle for ceiling bounce flash. Keep in mind that bounce eats up flash output, so you may want to increase ISO sensitivity. (At ISO 400, direct flash is rated to 30 feet.) Another caveat: the large supplied lenshood will shadow the lower portion of direct-flash pictures at wide angle, so remove the hood in this scenario. Or use bounce flash.

For more flash options, the Digilux 2’s dedicated hot-shoe will work with accessory flash units made for the SCA-3002 system.

Autofocusing is a hybrid system combining external passive sensors with TTL detection. It can lock onto most any detail, even in low light and low-contrast situations, but it can take its time. Our lab timed the AF at about 1.5 seconds in bright light, and close to 2 seconds in low light-slower than most digital SLRs we’ve tested. Shutter lag is very low, though, at 120ms, so you can fire quickly after prefocusing. The burst mode fires at 2.7 fps, the total number of frames depending on resolution and quality level.

Manual focusing is another curious amalgam of old and new. The focusing ring internally focuses the lens with the AF motors. As soon as you nudge the ring, the central portion of the EVF or monitor is magnified to aid focusing. (And yes, it looks almost like the central rangefinder patch of an M-series Leica.) We found manual focusing a bit awkward, however, and think that a focus-confirmation signal would have helped.

The Digilux can capture in RAW format as well as JPEG at various compression levels. (RAW capture takes just under 10 seconds to write to the card, and burst shooting is disabled.) The included SilverFast software’s RAW converter has many automated functions and presets working in a clean, uncluttered interface. Another useful camera feature is white-balance adjustment, which lets you fine-tune any white balance (preset or custom) by small increments for warmer or cooler tones.

In our lab tests, resolution results just made it into excellent, our highest ranking, on the strength of numbers more like those of a 6.3MP camera than 5MP. Color accuracy was extremely high, just short of excellent, and noise was quite low. Sharpness is aided by the DC Vario-Summicron lens, a 13-element optic with four aspheric surfaces.

There you have it: an excellent picture taker, and a refreshing change from the ordinary. But is it worth nearly two grand? After all, a fair number of 5MP advanced compacts can be had for less than a third of the cost of the Leica. And you can pick up any of several fine 6.3MP digital SLRs-with lens-for less. You’ll have to decide for yourself if the sharp imaging, superb handling, intuitive controls, and bulletproof construction are worth the difference.

What’s Not:
Fits no normal pocket. No manual-focus confirmation. No burst mode for RAW capture. For $1,850, a case is optional? No ISO higher than 400. Still an awful lot of bucks for a 5MP camera.