Kodak’s Canon Takes Aim…But does it hit the Mark II? For the last 15 years Kodak has been a leader... 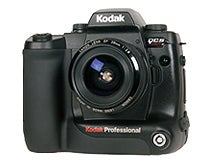 Kodak’s Canon Takes Aim…But does it hit the Mark II?

For the last 15 years Kodak has been a leader in the digital SLR race, with most of its top models produced in partnership with Nikon. But what if you’re a Canon shooter with an arsenal of EF lenses who wants the outstanding image quality of the 13.5MP Kodak DCS Pro SLR/n (reviewed April 2004) but doesn’t want to spend eight grand for the 11MP Canon EOS-1Ds? Now there’s an alternative-Kodak’s new 13.5MP DCS Pro SLR/c ($4,500 street).

This camera accepts nearly all Canon EF lenses, E-TTL Speedlite flash units, and various Canon accessories. And it has a flash sync that extends from 1/180 sec to 1/6000 sec when used in FP (Focal Plane) flash mode with compatible flash units. But there’s no pop-up flash built into the SLR/c, a feature that’s on the Pro SLR/n but few pro-level SLRs.

Canon also had nothing to do with this SLR’s core design and construction (including the AF system, metering, and camera exposure controls). These were built by another manufacturer, and while Kodak remains silent on the identity of its partner, there are enough hints in the operation of the Pro SLR/c for us to confidently point toward Sigma. As for building an SLR that uses a Canon EF mount and Speedlite technology without tipping Canon off to its plans, Kodak has long-standing licenses with Canon for use of its technology.

A unique scenario that raises big questions: If you’re a Canon pro shooter with a ton of EF lenses and flash units, and a budget below five grand, is the Kodak Pro SLR/cigma a better value than Canon’s similarly priced 8.2MP EOS-1D Mark II (see Pop Photo May 2004)? Or if you’re not locked into a legacy lens system and demand the image quality of a 13.5MP SLR, should you choose the Nikon-based Kodak Pro SLR/n? Let’s take a closer look at the Pro SLR/c’s features and handling.

Megapixel behemoth
For starters, the imaging heart of the Pro SLR/c is the same full-frame CMOS imaging sensor found in the Pro SLR/n. It captures a 13.5MP (4500×3000-pixel) image with 12 bits per color (RAW file), and has a base ISO of 160. In our image-quality tests, the Pro SLR/c performed almost identically to the Pro SLR/n: It captured images with excellent color accuracy and excellent resolution, as well as extremely low noise levels at ISO 160 to ISO 320. These results earn the Pro SLR/c an excellent image quality rating all the way up to ISO 320, where increased noise levels drop the rating to extremely high. Compared with the Canon EOS Mark II, which uses an 8.2MP sensor with a 1.3X 35mm lens factor, the Pro SLR/c captures noticeably sharper images with similarly excellent color accuracy. The Kodak boasts slightly lower noise levels at ISO 160-400, about the same as the Mark II at ISO 800, and worse at ISO 1250-1600.

How rugged is this camera and how does it handle? The SLR/c features a durable magnesium-alloy chassis that is similar to the original one designed by Kodak to protect the bottom and sides of the DCS Pro 14n SLR (see Pop Photo May 2003) and subsequent Pro SLR/n. But this one is taller and slightly fatter, making it less ergonomic and harder to hold than the Pro SLR/n.

The camera top is also rugged magnesium-alloy, but the controls located there have little in common with any Canon SLR, which may frustrate photographers used to the typical Canon setup. Most buttons are easy to find, however, with the majority placed on the top left side of the camera. On the top right side, you’ll find an Exposure Mode Selector lever that rotates between manual, shutter- and aperture-priority, and programmed exposure modes.

But we’re not happy with the clunky way that this dial works in conjunction with the C-dial. When you choose manual, aperture-priority, or program modes, the C-dial allows you to set the aperture or shift exposure without moving your finger far from the shutter button or lifting your eye from the viewfinder. However, when you select shutter-priority, the C-dial goes dead instead of acting as the shutter-speed dial. To change shutter speeds, you must reach awkwardly across to the S-dial located on top of the Exposure selector lever and rotate it in the directions marked “Fast” or “Slow” (this on a pro-level SLR?).

What’s on the menu?
Fortunately, other camera controls are much easier to use. Most of the Pro SLR/c’s back panel buttons are similar to those on the Pro SLR/n’s, but lack its useful rubberized surface. Pressing the menu button gives you access to four pages of options, most of which are identical to those found on the Pro SLR/n. These include the ability to set color space to sRGB, Adobe RGB, and Kodak Pro RGB. You also can change settings for JPEG file type (standard or extended range imaging-ERI-JPEG), compression levels, sharpness, noise reduction, look, exposure bias, and digital exposure correction. As with the Pro SLR/n, you can save images in JPEG, RAW, or RAW+JPEG formats, or in a combination of file formats using both CF or SD cards.

The ISO on the Pro SLR/c can be set in 1¼3-stop increments from 160 to 800 for JPEG images and up to 1600 for RAW. And there’s a High Performance-Low Noise (HPLN) mode that sets the camera down to ISO 6 for low-noise long exposures even in bright light-a remarkable feature that first appeared on the Pro SLR/n. White-balance controls are also identical, with five presets including auto, daylight, tungsten, fluorescent, and flash, plus an eyedropper tool for manually setting white balance off a neutral color. However, the CSM (custom) menu page is missing many useful Nikon settings found on the Pro SLR/n.

Other similarities between the Pro SLR/c and Pro SLR/n include the same rechargeable Lithium ion battery and most of the connections, including USB, FireWire, and PC-sync for external flash units. There’s also an auto-activating vertical shutter release and depth-of-field preview button. In playback mode, the Pro SLR/c has the same features and fast response time of the Pro SLR/n, and images can be shown with a histogram, exposure warnings, and data. But playback zoom and pinpoint luminometer still work only on RAW or ERI-JPEG images.

Focus in focus
While the Pro SLR/c is compatible with most Canon EF lenses, its focusing system is based on a TTL phase-detection system that includes a single cross-type sensor in the middle surrounded by four linear sensors. These are concentrated more toward the middle of the image area than on the Pro SLR/n, and our tests show that the system performs much like the Sigma SD9 and SD10. However, it doesn’t lock onto detail below EV 2, while the Pro SLR/n still focuses at EV 0 and in total darkness with an AF-assist light that’s missing here.

After shooting extensively in the field, we’d rate the AF system of the Pro SLR/c as a step backward from Pro SLR/n, and not even in the same league as the EOS Mark II (with seven cross sensors out of 45). However, its metering, white balance, and overall exposure controls were very accurate in auto mode.

In burst mode, the Pro SLR/c captured up to 19 JPEG or RAW images at about 1.7 fps (tested using a 2GB SanDisk Extreme CF card). But after a full burst, the camera locked up for a minute before allowing us to shoot another frame, and then it only let us shoot another JPEG every 15 seconds, or another RAW image every 10 seconds. Definitely not a camera for action photographers. For slower-paced, high-resolution studio and portrait work? Yes!

Our tests also showed the Pro SLR/c requires more power than the Pro SLR/n. It only lasted for 508 shots on a full charge without using the LCD at all for playback. The Pro SLR/n got 700 shots on the same battery-with half taken using its pop-up flash and the LCD in review mode.

The bottom line
So how does the camera compare to the Pro SLR/n? The slight image quality edge held by the Pro SLR/c due to its “Lens Optimization” feature (see sidebar) doesn’t offset its clunky operation, larger size, poorer battery life, missing pop-up flash, and fewer custom functions. So if you can go either way, the Pro SLR/n is a better value and a more sophisticated SLR.

If you’re a Canon shooter with a bag full of lenses and accessories who demands the highest image quality available in an SLR, the Pro SLR/c is the only choice in this price range. However, if you can live with slightly lower 8.2MP resolution and are looking for an otherwise superior performing camera that’s built like a tank, functions like a Canon pro, shoots 45 frames at 8.5 fps, and can last for over 1,000 shots on one battery charge, then the EOS-1D Mark II is the way to go.

Custom lens improvement
There’s been much talk of lens failings with CMOS and CCD sensors, which capture light differently than film. As a result, images from some lenses (especially wide-angle lenses at wide apertures) show increased chromatic aberrations (CA), which mostly appear as color shifts toward the outside of the image. Other problems include light falloff and vignetting toward the edges, and increased blur. But the Pro SLR/c includes a custom “Lens Optimization” feature for reducing chromatic aberrations, a feature we’d like to find on all digital SLRs.

Lens optimization controls can be quickly accessed via the menu screen, and turned to auto, manual, or to lens selection mode. This last mode lets you pick one of five lenses from a “favorites” list. You can swap these out with other lenses found on the camera’s master list, which includes 46 Canon lenses, 41 Sigma lenses, and 23 Tamron lenses. According to Kodak, you will be able to update the master list in the camera via a CF card.

In auto-on mode, the camera chooses the right lens automatically from the list (if it’s there) and applies default correction settings. In manual mode, you can turn off the correction or apply a generic correction without using specific lens data (useful if you’re using a nonsupported lens). However, in lens selection mode you can adjust the amount of CA correction applied for a supported lens from 0 to 50, and you can adjust that correction at two focal lengths (for example, wide and tele) and at two aperture settings (wide open and fully stopped down).

We shot test targets in our lab (illuminated by daylight-balanced HMI Dedolights) with several zoom lenses at a variety of apertures and focal lengths, in both auto and lens selection modes. We then analyzed the CA results using DxO Analyzer software from DO Labs. Measurable improvements (slightly reduced average CA readings) were found in lower-priced wide-to-tele lenses shot at wide angle and open aperture. These would only be visible in 8×10 or larger prints, while images taken with expensive aspheric L-series Canon lenses showed less improvement, since CA readings were very low to start.

This feature is a step in the right direction toward reducing CA-but so is buying a high-quality lens. Now, if only Kodak could do the same to reduce vignetting and lens distortion.