How to Tame High-Contrast Lighting

A pair of quick tips for taming high-contrast lighting when you shoot out-of-doors. 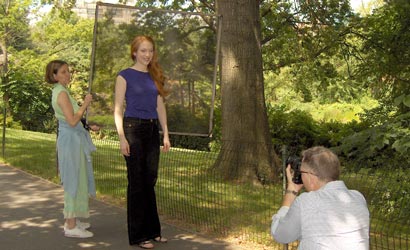 Whatever your outdoor subject, if you’re making pictures under a cloudless daytime sky, you’ve got a problem: contrast. Highlights can be blazingly bright and shadows impenetrably dark. Even with your DSLR at its lowest contrast setting, preserving detail in both highlight and shadowed areas can be impossible.

The good news: If you’re forced to shoot in bright sunlight, photographers have developed techniques that can dim down highlights and/or brighten shadows to ultimately shrink the dynamic range of a scene. Here are two such contrast-controlling techniques.

These are large panels of fabric mounted onto (usually collapsible) plastic frames. Larger than simple reflectors, they come in a variety of formats that control contrast in different ways. Depending on the reflectivity, translucence, or transparency of the fabric, they can serve as reflectors, diffusers, or even neutral-density filters. In use, the plastic frame may be held in place by an assistant (shown above) or clamped onto weighted lightstands. Either way, the natural enemy of scrims on any outdoor set is wind. Check weather predictions before taking one along.

One of the least well-known, but very useful, formats is sometimes called a black-net scrim. It uses a broad swath of transparent black mesh or netting to form an oversized neutral-density filter. When placed behind a subject, it can dim down an overly bright backdrop, increasing saturation of bleached-out color and adding detail to otherwise washed-out backgrounds. The pictures here show how it works — essentially like an analog version of High Dynamic Range (HDR) photography.

You can make your own scrim for less than $20 by nailing and gluing wooden slats into a square or rectangular frame, and then staple-gunning on gray or black net. Homemade scrims, though, often fall apart, and because the frames aren’t collapsible, they’re clumsy to transport.

A better alternative: The F.J. Westcott company offers many in its Scrim Jim line, with the largest (96×96 inches) going for just over $400, including fabric. The best thing about Scrim Jims: Their black nets are calibrated in stops and fractions of stops. You can tame a bright background by exactly 3/4 of a stop, for example. You can also put multiple nets on a single frame, until you find the exact degree of contrast control that the scene requires.

Click through online photo sharing sites, and it becomes clear that many amateurs don’t understand the truism that flash is just as important outdoors in bright daylight as it is indoors at night. It’s counterintuitive to pop up a built-in flash in broad daylight, and many photographers don’t.

In flat lighting, that’s usually okay, but in the contrasty daylight where a human subject’s eye sockets, for example, can look like black holes, switching the flash mode from “Auto” to “Always On” often makes the difference between failures and keepers.

Moral? The brighter the ambient light, the sooner you should pop up the pop-up.