How to Recover Lost Images and Other Files

If you've accidentally deleted photos from your memory card, chances are all is not lost. We put three leading image rescue programs to the test. 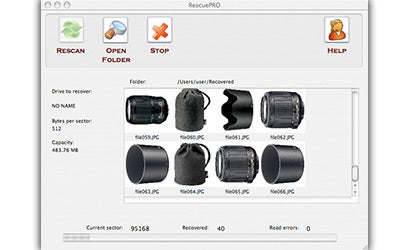 Have you ever been at a party and had someone pick up your camera and unintentionally delete your priceless party memories? Or maybe you accidentally deleted those important documents on your thumb drive. Assuming you didn’t continue using your storage device, there’s still hope of retrieving your lost images and files. We tested three of the biggest names in image recovery software to search for the best way to recover lost images and other files.

We only tested software available for both Macintosh and Windows-based PCs. For our test, we used JPEG images shot with a digital camera, though all three programs we tested can recovery other file types as well. Each program was tested using three series of five images shot with a Casio EX-Z1050 and Lexar Professional SD card. All three programs, DataRescue’s PhotoRescue 3.0, Lexar’s Image Rescue 3 and SanDisk’s RescuePro 3.2, were tested in both Macintosh and Windows-based computing environments and offered similar results though additional features and graphical user interfaces varied from program to program.

While testing on a Mac, all three applications performed identically. Because image recovery software is hopefully not something you’ll need to factor into your regular workflow, the ability to recover images is far more important than the time it takes to do so. Applications were tested for their ability to recover images, not the time it takes to do so, though depending on the size of your card and speed of your card reader, each program should take only a few minutes.

In our test running all three applications on an iMac G5 with Mac OS 10.4.10, each was able to recover 4 of 5 photos when images were deleted in-camera, no photos (0/5) after using the in-camera format option and 3/5 images after using the erase function in Disk Utility on the Mac. (Erasing a disk using Disk Utility renames and restructures the drive resulting in a permanent loss of some files.) Images (and files in general, regardless of type) are generally recoverable as long as the files have not been overwritten. Overwriting can happen if you continue shooting after deleting an image or format the card either in-camera or on the computer choosing to overwrite the disk with zeros. A basic computer-based format simply removes references to data but does not overwrite, so while data still remains on your card, it’s no longer visible.

Like the other two applications, following an unsuccessful recovery after an in-camera format, SanDisk’s RescuePRO offers an explanation for the recovery failure: “Some cameras overwrite deleted images and files with zeroes and data cannot be recovered.” If your card has been formatted in a camera that employs this method, chances are your files are permanently lost.

Results varied from program to program while testing on a Dell Latitude 620 laptop running Windows XP. PhotoRescue and Image Rescue 3 managed to recover all images deleted in-camera, though RescuePro recovered 4/5 images and the application became non-responsive twice before doing so. We didn’t experience any issues using this application in Mac OS. Results with an in-camera format were the same as on the Mac, as no images were recovered. After a basic computer format using Windows Explorer, RescuePro bested the other two applications recovering 4/5 images while Image Rescue 3 and PhotoRescue recovered 3/5 and 2/5 images respectively.

Occasionally image recovery software may be included with your memory card, either on a CD or pre-loaded on the card itself, so before formatting for the first time, check to see if this is something your card manufacturer offers. You can’t use the included Rescue software unless you install in on your computer first!

From our experiences, it’s generally possible to recover most images after deleting in-camera (but not formatting) or formatting the card using a PC or Mac, though chances are if you are formatting your card you intended to do so. A basic memory card format is similar to dragging files to the trash, though advanced options offer more secure methods of deleting data.

Once you realize that images might have been deleted accidentally STOP USING THAT CARD and begin shooting with a new memory card to prevent overwriting data. Be sure to review images in-camera before choosing to format, as memory cards often look identical. Remember, once you overwrite data it cannot be recovered, so remain calm, think, and stop using your card; there’s probably still hope

Though all three applications are easy to use, interfaces vary.

SanDisk RescuePro 3.2 ($40 street)
RescuePro gives you the option to recover photos, videos and other files such as documents and mp3s, as well as erase media with a fairly simple interface. Advanced settings allow you to control how thorough the software searches for lost images. SanDisk only mentions that it works with their own brand cards, though in our tests it was able to recover images from Lexar cards as well.