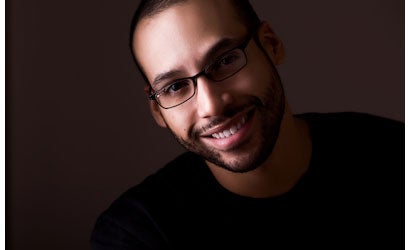 Bryan Officer has been taking pictures of all sorts of subjects since he was a kid, but his primary photographic interest has always been people. In his view, the clarity of emotions and ideas that a person can convey visually in just a brief moment makes human beings a richer subject for still imagery than any other. Unlike other photographic subjects, he explains, “we can communicate with our bodies and with facial expressions.” He also enjoys the satisfaction of creating work that his subjects appreciate. “When you photograph somebody and it turns out really well,” he says, “you’re happy and they’re happy.” Officer shoots portraits with a Canon Digital EOS 5D digital SLR and Canon’s EF 85mm f/1.2 L II USM, EF 135mm f/2.0 L USM, and 200mm f/2.8 L II USM lenses. Since he’s not photographing moving subjects and can control all the elements of his studio setup, he chooses prime lenses instead of zooms for their tack-sharp optics. “Zooms are for convenience’s sake,” he says, “but not the optimum performance. You may as well shoot with the best you’ve got. I wouldn’t choose a lens for convenience, to make it easier for me.” Officer’s lenses of choice also offer the very wide apertures that a portrait photographer needs to achieve the shallow depth of field that sets the subject off from the background.

Click on the cameras and lenses for more information about them from Popular Photography.

Here are some of the other items Officer uses during a portrait shoot:

AlienBees B400 and B800 Flash Units
“I don’t think you can have too many lights,” Officer says of his portrait studio setup. “There are certain rules to follow to get exposure, but there’s no dead-set way to light a portrait. There are a million different ways to position lighting to get a different feeling in a photograph.” Officer has been using his AlienBees for years and is still happy with their performance, even though they’re more affordable than many studio light brands. And for outdoor portrait photography, he notes, “The amount of power that a B800 puts out is good enough to use in direct sun.” His take on pricier studio-strobe alternatives: “I guess they’re great, and they’re physically more impressive, but performance-wise, I don’t see paying three times the cost.” He says he prefers to spend his money on high-quality lenses, where paying more can make a big difference in performance.

Officer has invested in one higher-end light, the White Lightning X1600. White Lightning strobes are made by the same people as the AlienBees units, but offer sturdier construction. Officer bought this unit to use with a 7-foot OctoDome softbox, which the AlienBees lights seemed a little too lightweight to support. He uses the X1600 and OctoDome as a main light for full-body portraits.

Photoflex Large 7′ OctoDome3
This huge softbox creates a diffuse, enveloping light source for full-length portraits and group photos. Officer uses it with his X1600 strobe for full-body shots. Photoflex’s octagonal softbox is also available in 3- and 5-foot sizes and in a 3-foot version made of heat-resistant material for use with hot lights. It comes with internal silver and gold reflective panels that allow control over the warmth of the light. An octagonal light source creates rounder catch lights than a typical square softbox.

AlienBees Foldable Softbox
“They’re amazingly convenient,” Officer says of AlienBees’ foldable softboxes. “They fold like an umbrella.” That makes them easy to set up not only in a studio but also when taking portraits outdoors or on location. Officer uses 30×60-inch models to create large, soft sources of illumination for portraits. AlienBees also sells smaller and larger foldable softboxes, as well as ones with octagonal and narrow rectangular shapes.

AlienBees ABR800 Ringflash
AlienBees also makes this ring light, which encircles an SLR lens to cast a flattering illumination that creates minimal shadows on the face. It will also cast a soft, even shadow around a subject standing near a background. Says Officer, “I like taking a picture of someone near a wall and having that halo effect around them.”

Bogen/Manfrotto 3137 Variable Spread Dolly
Since Officer uses prime lenses when he’s shooting studio portraits, he has to move the camera to change his composition. When he wants to combine the stability of using a tripod with the flexibility of shooting handheld, he puts his Bogen 3021 tripod on this dolly. It makes adjusting the distance between camera and subject quick and easy, which is especially important when photographing people. As Officer explains, “If someone is sitting posed, I don’t want to keep them waiting. I just want to take the shot.” Plus, he says, “it’s fun to roll around.”

Bogen/Manfrotto 322RC2 Heavy Duty Grip Ball Head
Squeezing the grip on this ball head allows the attached camera to rotate 360 degrees and tilt 90 degrees; releasing it instantly locks the camera position. Officer uses the 322RC2 on his Bogen 3021 tripod because it makes repositioning his camera quick and easy. “It’s a great head,” he says, “because you can position the camera and let go, and it stays in that position. If you’re moving around a lot, using a prime lens… you need to reposition it quite a bit.”

About $120
www.bogenimaging.us
Read on to find out what Officer would like to add to his studio setup.

We asked Bryan Officer what he would like to add to his studio setup. Here’s what’s on his wish list:

Sekonic L-758DR DigitalMaster Lightmeter
Officer currently uses a Polaris light meter that cost about $200, and that he considers superior for studio photography to both the analog light meters he used in the past and his camera’s metering system. “It works,” he says. “You can hook up the studio strobe directly to it.” But if he could have any meter on the market, he’d take this fancy Sekonic, which is designed to achieve highly precise exposure metering for digital photography. It uses analytical software and a special test target to create dynamic-range profiles for individual digital SLRs; includes a 1-degree spot meter; and can average up to nine separate readings. (If you’re giving a gift to a portrait photographer who is still working with an in-camera meter and don’t have the budget for this one, a less expensive digital handheld meter is still a good option.)

Manfrotto Boom Stand 420
In addition to lights with softboxes, Officer sometimes uses reflectors to bounce light onto his subjects. He’d like to have one of these boom stands to hold and position a reflector. With the boom arm removed, it can also support a light and softbox. It can be purchased with or without a sandbag that works as a counterweight to an attached reflector or diffusion screen.

Savage Widetone Seamless Paper Background
Just about any portrait photographer would appreciate having more background paper on hand, and Officer is no exception. “Any color would be great” he says, “vermillion, fuchsia, orangish-yellowish-pink — it’s nice to have a variety.” If you’re shopping for someone who doesn’t have a background setup yet, take a look at Savage’s background support systems, which start at about $65.

Datacolor Spyder 3 Elite
“I shoot to print,” Officer says. Since he’s a portrait photographer, Officer frequently makes prints for his subjects, so using a calibrated monitor to get the color and brightness right in his print output is important. “Monitor calibration is as important as the strobes and camera,” he explains. He currently calibrates his monitor with an older Spyder model, but would like to upgrade to this one, which offers before-and-after calibration displays, precise control over white point and gamma, fast recalibration, and multiple-display calibration.

Samsung SyncMaster 275T
Officer would love to have this monitor both as part of his digital darkroom setup and to use in his studio. He likes to have the option of showing his subjects the photos he’s taking during a break in the shoot, to make the process more collaborative. “I want some type of involvement from them,” he says, “because they’re ultimately who I want to make happy.” The 275T is a 1920×1200, 27-inch widescreen LCD that has earned widespread praise for its image quality and provides a relatively affordable alternative to pro-oriented monitors that can cost twice as much, or more.

Canon EF 70-200mm f/2.8 L IS USM
Although he prefers to use prime lenses for studio portraits, Officer would like to have a high-quality zoom lens for shooting outdoor and location portraits. “Especially outside, you’re not going to feel as comfortable switching lenses,” he notes, pointing out that some settings don’t allow the photographer to move around much in order to change composition. This popular lens would cover the focal-length range that he likes to use for portraits and let him keep the depth of field shallow to blur out backgrounds. It also offers the extra flexibility of optical image stabilization.

About $1600
Get more information about this lens from Pop Photo.
www.usa.canon.com