Hands On With the Olympus Evolt E-330

A first-of-its-kind D-SLR, the Olympus Evolt E-330 lets photographers compose pictures on a big, "live" external LCD, as well as in the viewfinder. Will they want to? 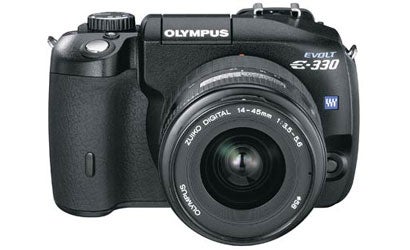 One basic difference between digital point-and-shoot cameras and interchangeable-lens digital SLRs is the function of their external LCD screens. On point-and-shoots the screen is used both for composing pictures and for reviewing them once they’ve been taken. On a D-SLR the screen is used only for reviewing pictures; as with film SLRs, you have to compose through the optical viewfinder. The Olympus EVOLT E-330 is the first digital SLR to do away with that distinction: In addition to displaying pictures you’ve shot, its big, bright LCD gives you a “live” image with which to view and compose.

The obstacle to this achievement has been that until the instant of exposure, an SLR’s reflex mirror bounces incoming light into the viewfinder — far from the image sensor, which in the E-330’s case is a 7.5-megapixel CMOS-type. Olympus’s ingenious solution, made possible by the ever-falling price of silicon chips, is to place a second sensor within the viewfinder path. Borrowed from a Stylus point-and-shoot, this tiny eight-megapixel CCD doesn’t provide the eyepiece image, as in a camera with an electronic viewfinder; it’s used only to create a live view on the E-330’s 2.5-inch external LCD screen. Because this screen can swivel up or down — a feature found on some bigger point-and-shoots — the E-330 can be used for accurate low- or high-angle shooting. By comparison, the existing E-300 has a 1.8-inch fixed-position LCD, and of course no “live view” feature.

We found the camera’s live monitor extremely useful for the kind of waist-level shooting we like to do with digital point-and-shoot cameras having articulated screens. There’s still room for improvement, though. Probably because the live view is produced by a separate chip, only 92 percent of the final image area is shown on the LCD during preview. Seeing less than you get isn’t unusual by SLR viewfinder standards, but this is less accurate than the display on a typical point-and-shoot (which is fed directly from the image sensor). We were sometimes surprised to see scene details we hadn’t meant to include along the edges of the captured image.

The new EVOLT offers a second screen mode, called Live View B. When you set this mode the side-swinging reflex mirror (which accounts for the flat-topped design the camera shares with the E-300) flips out of the way, allowing light from your subject to reach the image sensor itself. Thus in Live View B, the preview image is 100 percent accurate. This also allows you to preview depth-of-field. Live View B is particularly well suited to macro photography with the E-330 mounted on a tripod. Focusing is manual-only, though, aided by a 10X magnified view of the center of the image.

We used the new Olympus Zuiko Digital 35mm f/3.5 macro lens on the E-330, in both Live View modes, to make close-ups of plants in a window garden. Mode A proved more convenient but Mode B provided a more precise preview of the final picture. The 35mm lens produces an angle of view on Olympus D-SLRs comparable to 70mm in the 35mm format, so we had sufficient working distance to light the subject. Results were first-rate in both modes. We also had fine results doing candid photography with the E-330 and an Olympus Zuiko Digital 11-22mm f/2.8-3.5 zoom (equivalent to 22-44mm in 35mm). While the E-330 isn’t as inconspicuous as a small point-and-shoot camera, holding it at waist level made it much less noticeable than an eye-level SLR.

The E-330 also offers several operating improvements over the E-300. These include more sophisticated multisegment and spot metering; better noise reduction for speed settings from ISO 400 to 1,600; and more image-compression options. Although image size has been slightly reduced from the E-300’s eight mega-pixels, we didn’t notice any loss of sharpness. (Like its sibling, the E-330 saves JPEG, TIFF, or RAW files to both xD-Picture and CompactFlash memory cards.)

Photographers who use digital point-and-shoot cameras will find the Olympus EVOLT E-330 an easy step up to the world of D-SLRs. They can compose pictures on the LCD the way they already do, or take advantage of the somewhat greater accuracy of the reflex viewfinder. They’ll find familiar automated features, including 20 scene modes. But they’ll also experience the creative possibilities of interchangeable lenses — and far more operating flexibility than any point-and-shoot can offer.