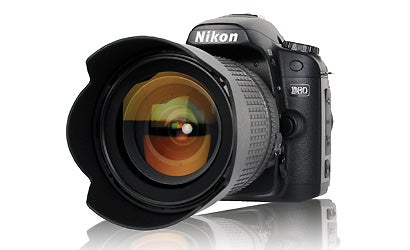 If the Nikon D70 of 2004 was The Camera Nikon Had To Make, the new D80 is the Camera Nikon Absolutely Had To Make. Fine though the 6-megapixel D70 (later D70s) was, it was looking ever more dated next to newer 8MP and 10MP digital SLRs from Canon, Olympus, and Sony.

Nikon’s message with the D80, though, is not “Me too” but “Let’s rumble.” This 10.2MP DSLR, priced at $999 (body only, estimated street) might be called a D200 Lite, except there ain’t nothing lite about it-other than the weight, a fraction of an ounce below the trim D70s. (It’s a bit smaller, too.) It packs lots of technology derived from the Nikon D200 and D2x models, plus so many in-camera image-editing controls that it could be called Photoshop to Go.

The handling of the polycarbonate-bodied D80 is vintage D70-comfortable in the hand, with well-placed controls. As on the older camera, the rear command dial and jog dial are within easy reach of the thumb, while the front command dial isn’t quite convenient to the index finger. The image zoom in playback is now a much more convenient one-button operation.

• The 10.2MP CCD imager, similar to that in the D200, provides a maximum image size of 3872×2592 pixels, with a 35mm lens factor of 1.5X. The new processing engine claims faster startup and shutter response, plus a faster burst rate of up to 100 full-resolution JPEGs at 3 fps, using medium-fine compression. It saves to an SD/MMC card rather than CF.

• The 11-point autofocusing array uses the Multi-CAM 1000 AF module of the D200 for faster lock-on and subject tracking, and has larger and more-visible viewfinder indicators.

• Metering options include 420-pixel 3D-Color Matrix Metering II, which compares lighting conditions to 30,000 sample scenes in an onboard database. Adjust the sensitivity of the centerweighted metering, as on the D70/D70s, and meter an approximately 2.5% spot at any focusing point.

• Full compatibility with the i-TTL Speedlight system includes Commander Mode: The on-camera flash serves as a wireless trigger for one or more compatible Nikon Speedlights. The D80’s flash can control strobes in three groups in any of the four channels, rather than a single group and channel as on the D70/D70s. Its fastest sync speed, though, is 1/200 sec, rather than 1/500 sec.

• The glass pentaprism viewfinder has a relatively high magnification of 0.94X, and the big 2.5-inch 230,000-pixel LCD monitor has a 170-degree viewing angle.

• It can convert a RAW-NEF to a JPEG at any time, a boon for photographers who like to shoot in RAW but may not want to create a simultaneous JPEG for every shot (as in RAW + JPEG mode).

• An RGB histogram is added to the overall luminance histogram.

• Slide shows, including dissolves and limited musical themes, can be created in-camera and output via A/V cable.

• The D80 ships with the EN-EL3 Li-ion rechargeable battery, which has a CIPA battery life rating of 2,700 shots per charge, and has the “fuel gauge” battery-state indicator of the D200. It accepts a battery grip (the MB-D80), which can take two EN-EL3e or six AA cells and provides a vertical shutter release. A hard-wired remote release is available, as well as a wireless.

• It adds multiple-exposure capability and an assignable function button.

Given its high-end features and low-end price, will the D80 cut into sales of the $1,700 D200? Nikon points to the D200’s pro-oriented qualities-a well-sealed and tougher metal body, 100,000-cycle shutter, and greater burst capability-to maintain its market share. We think dealers had better order D80s early and often.

Consider This If…
• You’ve been waiting patiently for a more potent D70.
• You want a great backup for your D200.