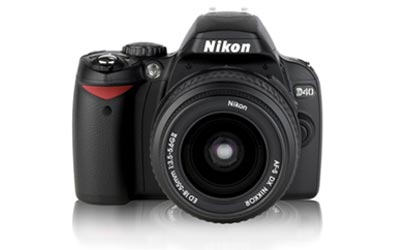 Here is Nikon’s DSLR for Everyman and Everywoman, the D40. The replacement for the D50, it keeps the 6.1-megapixel sensor but boasts upgrades to the viewfinder, LCD, metering, processor speed, burst rate, noise suppression, in-camera editing, and user help, in a smaller and lighter package. Now for the really hot feature: The new camera, at $599 (street) with an 18-55mm f/3.5-5.6 II AF-S Zoom-Nikkor DX lens, is $100 less than the current D50 with a kit lens.

At very first glance, the D40 looks pretty much like a trimmed-down D50, but a closer look reveals a simplified layout intended to be less intimidating for anyone who’s not a photo geek. For starters, there’s no top LCD panel. Instead, control readouts appear in big readable type on the rear LCD monitor, a 230,000-pixel 2.5-incher rather than the D50’s 2-inch version. This setup is fine by us, given that the top panel readouts on the D50 aren’t very readable.

Have a question about any of the controls? Pressing the info button brings up a verbal description and sample photos — for example, the effects of various levels of fill flash. So the tutorial isn’t just in the box, it’s literally in the camera. And if the control panel readouts strike you as too dull for the back of your camera, you can customize it with wallpaper — any photo you choose.

The new camera shaves at least a quarter of an inch from all three dimensions of the D50, and is smaller even than the tiny Canon EOS Rebel XTi tested in this issue. But the D40 has plenty of gripping room, even for large hands, and the locations of the shutter button and command dial feel just right.

Surprising is the inclusion of all the in-camera image controls of Nikon’s new D80 (except for black-and-white filter effects): D-lighting for toning down scene contrast, color filter effects, redeye removal, and color balancing with the help of color histograms.

The autofocus uses 3 AF points arranged horizontally across the frame, with a cross sensor at the center. While this might sound like a downgrade from the D50’s 5-point array, Nikon says that the system uses algorithms from the D80 and D200 for faster and more predictive lock-on. The AF can also switch automatically between single and continuous AF based on subject movement.

One major negative point to note is that autofocus won’t work unless the lens is a relatively new, digital-only AF-S or ED-IF series. These both differ from older Nikkors because they have the AF motor built in to the lens body. (For more on the D40’s lens compatibility issues, see our update.)

The pentamirror viewfinder gets a (needed) magnification boost to 0.80X up from 0.76X; startup is faster; and the burst, at 2.5 frames per second, captures a huge maximum of 100 full-resolution, highest-quality JPEGs. Noise suppression has been improved so that the D40 can capture images up to ISO 3200, also impressive for this class. The 420-pixel 3D Color Matrix metering of the D50 is maintained, but with improved recognition of the sizes, shapes, and position of objects in the frame.

The smaller, more compact Li-ion battery designed for the D40 is responsible for much of the weight savings (2.3 ounces), but nonetheless increases CIPA life to 470 shots, up from the D50’s 400 shots (both ratings with 50 percent flash shots).

The D40 is compatible with all Nikon i-TTL flashes, including the big bomber Speedlight SB-800, but Nikon’s catering to the target audience with a new low-cost accessory unit, the Speedlight SB-400 AF. Priced at $129 (estimated street), it adds some extra reach and a bounce head, but does not have wireless capability.

While we were expecting maybe a few more megapixels in the new camera, it didn’t fit in with Nikon’s strategy here. And that is to attract lots of first-time DSLR buyers with a camera that won’t scare them off, at a price that won’t break the piggy bank. We’d say it has a pretty good shot at doing that.