Break out your asbestos suits because Canon is turning up the heat in the SLR wars. 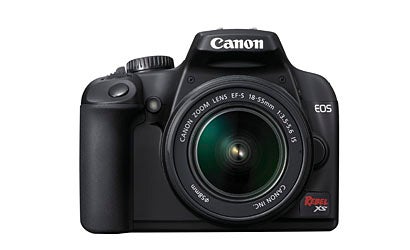 After seeing Nikon spring back to life with its high-end powerhouses, Canon has decided to change its entry-level strategy starting with the new EOS Rebel XS. A replacement for the EOS Rebel XTi, the XS does away with the company’s method of letting last year’s model serve as its bargain SLR. Going forward, Canon will keep all its SLRs up to date with the newest technology.

What does the Rebel XS have that the XTi didn’t?
• Image Stabilization: It comes with Canon’s updated EF-S 18-55mm f/3.5-5.6 II IS kit lens.
• Digic III processing: This should help with overall image quality, noise reduction, and performance, but onboard memory constraints mean the XS will have 12-bit A/D processing, so you won’t find Canon’s Highlight Tone Priority here.
• Live View: The XS will have the same on-screen framing as the XSi, so users stepping up from digital compacts will have a smooth transition.
• Better JPG burst: The XS will let you shoot JPGs at 3 frames per second up to the capacity of your SD card. RAW burst shooting drops to 1.5fps for up to 6 shots, also due to the above-mentioned memory constraints.
• More juice: Canon says that the XS will have about 50 percent more shots per battery charge compared to the XTi and the XS will use the same LP-E5 battery as the XSi.

What are you giving up by not spending extra for the XSi?
• Two AF points: While the XTi had the same 9-point diamond-pattern AF system as the Rebel XSi, the Rebel XS sports a 7-point AF system-5 across with one above and one below the center point. The 7-point system covers a wider area, so it may be able to deal better when tracking motion across the frame, but you might also lose some sensitivity with subjects toward the corners. The center point remains a high-sensitivity cross-type sensor.
• Megapixels: The Rebel XS, like the Rebel XTi before it, sports a 10.1MP CMOS sensor, while the Rebel XSi includes a 12.2MP sensor.
• LCD size: The new Rebel XS checks in with a 2.5-inch LCD, while the Rebel XSi has a 3-inch screen.
• Viewfinder magnification: According to Canon, both the XS and XSi deliver 95 percent coverage when looking through the viewfinder, but the XSi also claims 87 percent magnification, while the XS has 81 percent magnification, which is ever-so-slightly better than the XTi was. Bottom line, XS will give you a little more tunnel vision than the XSi.
• Wireless remote: The Rebel XSi supports both wired and wireless remotes, as did the XTi, the Rebel XS will only support a wired remote. Of course, either way, you’ll have to purchase it separately.

All in all, it’s a minor upgrade in terms of technology, but that still keeps it toward the front of the pack in terms of entry level SLRs. Given that it’s expected that it’ll be the camera of choice for people stepping up from digital compacts, it makes sense that it’ll record its images to an SD card instead of a CF. Like the XSi, it has two methods of autofocus in Live View mode. The contrast-based version works without blacking out the viewfinder, but is slower than the phase detection type, which has to flip up the mirror and block out the live view while focusing. Neither of these two options is as smooth as the one in Sony’s A350, which employs a second sensor so that you get uninterrupted live view while focusing. Along with the camera announcement, Canon has let loose an update to its 430 EX flash, which will be called the 430 EX II. Again, the updates are minimal and include a more-rugged metal shoe, a new locking mechanism, similar to the one found on the flagship 580EXII flash, third-stop increments in manual mode. The flash head covers a range of 24-105mm, can be extended to 16mm with the flip-down diffuser, and can rotate 270-degrees and flip upward 90 degrees the same as its predecessor. In wireless mode, it can act as a slave, but not as a master, so you’ll still have to use a 580 EXII or Canon’s ST-E2 Speed light Transmitter if you want wireless control with the EOS system. It’s really time for Canon to build wireless control into their cameras instead of making you buy a separate unit or pricey flash to get that capability. No US pricing or availability date have been set yet for the newest Rebel.