In the battle of the bargains, the Rebel packs Establishment clout. 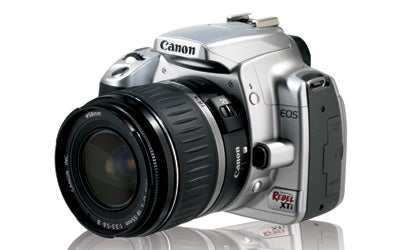 Can you still be called a Rebel after you snag a pile of assets from your well-to-do siblings? Canon obviously thinks so, given that its new EOS Digital Rebel XTi has been loaded up with power and features taken from its EOS 30D and 5D cameras — plus one advanced system seen on no other Canon digital SLR.

The XTi ($799, estimated street, body only; $899 with 18 – 55mm f/3.5 – 5.6 II EF-S lens) most notably captures 10.1-megapixel images — leapfrogging it ahead of the higher-priced 8MP Canon 30D and putting it squarely in competition with the Sony Alpha 100 and the new Nikon D80. The Reb XTi also gains a dust-reduction system that uses both hardware and software suppression of dust — a first for Canon DSLRs. Upgrades to autofocusing, image processing, burst rates, and the LCD monitor round out a package clearly designed to compete aggressively in the higher end of the increasingly oxymoronic “entry-level” class.

The new XTi is still svelte, virtually the same size as the XT, and with a weight gain of just under an ounce. The addition of a rubbery bump as a thumb hold improves its grip considerably. On the back, a big 2.5-inch, 230,000-pixel LCD with a 160-degree viewing angle replaces the relatively tiny 1.8-incher of the XT.

The XTi also eliminates the top LCD control panel, instead using the rear LCD. Given the big, readable type, we found this much more convenient for adjusting controls. The LCD also shuts off automatically when you bring the camera to your eye and turns back on when you lower the camera. Otherwise, the body construction and control layout remain largely the same.

Considerable effort went into reducing the chances of dust marring your images. The low-pass filter in front of the CMOS sensor vibrates when the camera is turned on or off (or can be triggered manually) to shake dust free. The filter is treated to repel dust electrostatically, and it’s farther from the imager to keep any leftover dust outside the depth of focus. Should any dust still remain in the image path, the XTi can map it for software to subtract from the picture later. This function, called Dust Delete Data, is engaged by a menu command; the dust-map data is appended to the image file. It can then be applied postproduction with Canon Digital Photo Professional software (version 2.2 or higher).

While similar technologies are already in use by other camera makers — ultrasonic imagers in Olympus E-1 and Evolt cameras, and dust mapping in the Nikon D2x and D2h — the XTi is the first DSLR to use both hardware and software to remove dust. But applying the map data on a computer is slower than doing it in-camera.

The autofocus system is the nine-point, diamond-shaped array of the 30D and 5D, not the seven-point AF of the Rebel XT.Metering range has been made 1 stop more sensitive than the XT’s in low light, and can now read down to -0.5 EV (ISO 100).It inherits the Picture Styles menu of the EOS 30D, 5D, and 1D Mark IIn, which allows you to specify color/contrast/sharpness profiles — such as Faithful, Portrait, and Landscape — and to customize these profiles.The XTi gains an RGB histogram, in addition to one for overall brightness.Users can zoom the magnification of the LCD in instant playback or review mode.The number of custom functions has been expanded to 11 from nine, and these now contain 29 individual settings, up from 24.In a substantial speedup, the XTi can grab up to 27 highest-res and -quality JPEGs, up from 14, at 3 fps. And, 10 RAW images can be shot in a burst, up from five.The XTi has a direct print button, and extended functions have been added to its PictBridge programming to allow it to work with more-advanced Canon printers.Up to 9,999 image files can be stored in a single folder, up from 100. And unlike the XT, file numbering can be reset manually.

Given the performance and features of the Rebel XTi, the obvious question is: Where does this leave the EOS 30D, which costs $350 more for less pixel power? Canon says advanced users will still favor the 30D for its more rugged, better-sealed body, 100,000-cycle shutter, and higher burst rate. We shall see. The current $700 (street) Rebel XT, meantime, will remain in the Canon lineup.

New & Noteworthy
– The Rebel breaks into the 10MP club.
– Hardware and software dust reduction.
– Double the burst capacity of the XT, at a similar 3 fps.

Consider This If…
You want 10MP and high-end Canon image controls — at an entry-level price.