Four Light Portrait How To

Four strobes, plus fire, make for a magical portrait set-up. 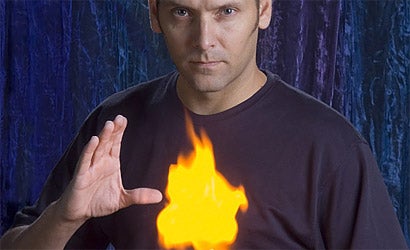 When a magician friend called recently to ask if I would shoot a promotional image for his marketing efforts, I quickly researched other shots of magicians and found the majority to be poorly lit and frankly a little boring. So to set ourselves apart from the rest, we decided to do something a little different.

Our first idea was to incorporate one of any magician’s best tools, fire. My friend wanted a casual look for his show, so he dressed down in his on-stage attire and I set up my lights.

I used a four light setup — all AlienBee’s. I used an AlienBee B800wattsecond (ws) for the softbox (3×4 foot box), a B400ws for the umbrella fill light, a B400ws for the background light and an additional B400ws on a boom stand for the hair light.

The graphic to the right is a setup of the studio.

Doing the setup was actually the easy part; the tough part was figuring out how to measure a flame that’s only there for an instant. Another concern was figuring out how to measure it while ensuring that the lighting in the studio wouldn’t overpower it. Too much strobe and the flame looks weak. Too little strobe and the flame overpowers the scene.

I finally decided to use a flashmeter to measure the intensity of the flame. After all, the duration wasn’t much longer than some strobes, so it “should” work, right?

Using my old Minolta Flashmeter III, I got a measurement of f/8 at 100 ISO for the flame, so I set up the rest of the lights to balance around that, taking individual readings from each strobe and adjusting the power output of the unit accordingly. Since Kurt is a pretty rugged-looking fellow, I decided to use a stronger lighting ratio of 5:1 to give the shadows some depth and sculpt his face a little more. I matched the hair light to f/8 simply because I wanted to show detail in his hair but not blow it out. Stronger lighting would have given him a more dramatic backlighting that, in my opinion, would compete with his face and the flame. The background is slightly overexposed at about f/8.5. This was done to give the dark cloth some added detail in the final image.

I shot this image in RAW with a Nikon D200 and a 105mm Micro lens, which is an awesome portrait lens as well. The most difficult part about this shoot was timing the flame correctly. To my surprise, it only took us six shots to get the image that we wanted, where his “look” was good and the flame was in a pleasing position. The final image is to the right.

Overall I was pleased with the image, particularly the one part that I had no control over — the flame. I like the lighting on his hair. It’s not too much or too little, and it had the added bonus of giving his shoulders a nice rim light as well, which gave them some definition in a similarly colored background. I also like the light on his face. To me, it’s sculpted to define his features and is pleasing.

My one dislike is that I cut his elbows off. But this image is intended for use in newspapers and magazines, so if I had left them in, they more than likely would have been cropped out anyway. We also cropped the image to be a 4:5 ratio, so it makes a perfect 8X10 inch print.