Polarizing filters aren't just for your lens -- bring 'em inside and put one on your light! 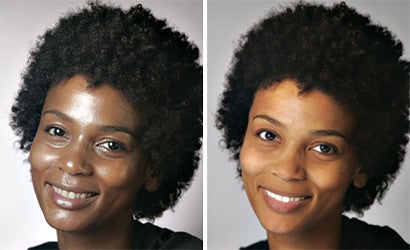 Do you own a polarizing filter? If so, I bet you use it almost exclusively outdoors. Polarizers juice up landscapes with richer greens, make blue skies even bluer, eliminate color-muting reflections from water, and more.

But guess what? Polarizers can be just as useful indoors. In the portrait studio, for example, they can reduce or eliminate reflections from eyeglasses and tone down facial sheen caused by skin oils or lotions. In fact, for some portrait subjects, I find the best results come from using not one, but two polarizing filters.

The Catch-22 with using a single polarizer to improve your portraits hangs on the angle of your lighting. For many faces, the most flattering position for the main light is close to the camera and lens — sometimes called on-axis lighting. (Light aimed from above the camera position is so flattering that it’s often called “beauty light.”)

The problem: The closer the light is to the lens axis, the less effective a lensmounted polarizer will be at controlling sheen or glare.

What to do? Polarize the light source. Covering your softbox with a polarizing sheet gives your lens-mounted filter additional reflection-blocking power because more of the light reflected from your subject is polarized. The technique works equally well with reflective objects in product shots.

|| |—| | Ask Peter Q. Can you recommend a book on the science of light? A. Focal Press recently released the third edition of Light — Science and Magic by Fil Hunter, Steven Biver, and Paul Fuqua. Among numerous other subjects, it fully explains the benefits — and pitfalls — of double polarization.| The unretouched pictures here show a portrait done with and without double polarization. The model is wearing a moisturizer that produces the sheen visible in the straight shot. Polarizing both the light source and the lens fully eliminates that sheen and smooths out the skintones more completely than is possible with the lens polarizer alone. A Rosco Cinegel 17×20-inch Polarizing filter ($40, street) covered the softbox, and Hoya’s 67mm Moose Peterson Warming Polarizer ($80, street) was on the lens. Moose’s filter arrests the polarized light and contributes the flattering warmth. It’s a great filter for people pictures.

If you try this yourself, use a fairly bright light with a modeling lamp — a simple on-camera flash won’t do. Here, the two filters absorbed almost 2 stops of light, so I suggest 300Ws or brighter to avoid having to crank the ISO to 800 or higher.

Also, some reflections in portraits are desirable: Sheen adds life to hair, for example; and highlights on the chin, cheek bone, and forehead help define the contours of a face.

The good news? You can add back as much reflection intensity as you like just by giving the on-camera filter a twist.