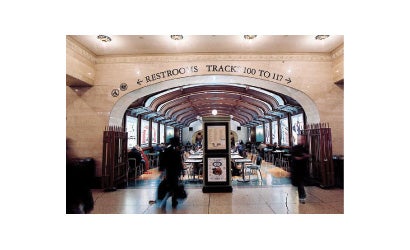 Medium- and large- format photographers who use color negative film have always had a choice denied to like-minded 35mm shooters: film emulsion balanced either for daylight, to shoot by natural light and strobe, or for tungsten, to shoot by existing incandescent and “hot” studio light. There were no such thing as tungsten-balanced 35mm color negatives. (Slides are another story.)

For reasonably faithful prints in tungsten light, you had a couple of imperfect options. You could shoot daylight-balanced color negative film with a light-sapping blue filter on the lens, and lose a couple of stops of working speed.

Or you could get the yellow out with filtration in printing, a gamble with automated labs. Either way, full correction could add traces of blue to the image, and partial correction would probably leave a yellow cast you’d rationalize by saying that tungsten light looks “warm.”

Not anymore: At long last, there is now a tungsten-balanced color negative film in 35mm format.

Kodak Professional Portra 100T is an emulsion I’ve yearned for. I originally wanted it for two related, but very specific, applications. One was to photograph artwork by hot lights when prints, rather than slides, were required; the other was to take installation views of art exhibitions lighted by typical tungsten spotlights.

But the new film’s uses go way beyond those two. Despite its evocative name, Portra 100T is not just for portraiture. It lets you shoot 35mm interiors by existing incandescent sources, such as lamps and ceiling fixtures, without resorting to corrective filtration.

It also lets you do studio-style lighting with a 35mm SLR using inexpensive floodlamps instead of costly strobes, yet still get spot-on skin tones and a full range of color, as well as easier exposure control.

By the same token, Portra 100T is well-suited to making inventories of your possessions (crank up the room light and use a tripod) or shooting items to sell on eBay.

Why bother with this film, since digital SLRs offer adjustable white balance? The practical answer is that it permits 35mm SLR-style shooting, in tungsten light, with a much less expensive camera. The honest answer is that a lot of us still like film.

I tried Portra 100T in the ultimate tungsten-lit interior, New York’s Grand Central Terminal. Its one drawback in such a situation: At ISO 100, it doesn’t have enough speed to permit shutter speeds fast enough for handheld shooting. So I used a small tripod-until security personnel stopped me.

I then switched to a monopod, and was stopped again. At that point I switched lenses from a fixed wide-angle to an image-stabilized zoom. While not quite as fast an optic, it let me set shutter speeds two or three stops slower than I’d have otherwise needed for handheld work.

In fact, if you want to try Portra 100T, I’d suggest using it with an image-stabilized lens to lessen your need for a tripod. This allowed me to shoot unchallenged in Grand Central, though I took to bracing the camera on railings and against walls for a little more latitude. And speaking of latitude, being a color negative film rather than a slide film, Portra 100T let me pull perfectly good prints from underexposed frames.

I do wish there were a faster version of this film, however, given that tungsten is usually low light. I can dream, can’t I?

I had my Pro 100T processed by the same minilab that often handles my daylight-balanced color negatives. Looking at the resulting prints was a cognitively odd experience: Here were 4×6-inch machine prints of lamp-lit scenes that had a full spectrum of color, without the expected yellow cast-images in which the cooler hues ordinarily squelched by daylight-balanced film came through loud and clear.

Overall, the film had the rich, neutral color and impressive sharpness I’ve come to expect from the Portra family, surely one of Kodak’s most successful film lines ever.