Get the right white with this helpful and easy white balance tool. 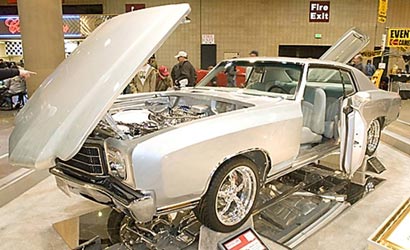 In 1980, the world of photography was a very different place. Film was the undisputed medium and photography’s elder statesman Ansel Adams was still alive. Those who discussed pixels, color space and resolution were typically PhD’s who were working for R&D facilities or the military. Outside of shooting Polaroids, the average photographer couldn’t fathom the ability to shoot and instantly see the results as a high resolution, full color image.

Back In 1980, George Wallace was one of those photographers, and he had an idea. An avid fan of Ansel Adams and the zone system, Wallace dreamed of making a device that would work as a simple converter — making the average camera and lens into an incident meter. Little did Wallace know that years later, his idea would start a revolution in the field of digital imaging by making a product that balances color nearly perfectly each time it’s used.

Wallace died in 2001, never seeing his invention come to its full modern fruition. His daughter, Diane Wallace, who is an art historian and amateur photographer, wanted to see his invention grow, and in a chance conversation with a forum of photographers, Wallace realized that what her father had invented was more useful to digital photographers than film-based zone system enthusiasts. So, Wallace and her family began the process of refining the disc for the digital age.

“He had a lathe on the porch in the back of his house. Back then, it took about 30 minutes to make one disc and they were completely hand made,” explains Eric Sowder, Wallace’s grandson and the President of ExpoDisc. “We have refined the process twice since then, but basically the discs are still hand made…”

Hand made, but at an extremely high level of precision. The tolerances for correct color are within 1 percent on each disc the company manufactures, which range in price from $80 to $200. This level of precision becomes obvious when you open your ExpoDisc box and see that little card with the densitometry readings for the disc you’re holding. While the density readings have no real bearing on the disc and your use of it, it does drive the point home that this is a high precision device and suddenly, it becomes obvious why the disc is a little more expensive in comparison to an average filter or cardboard gray card.

“The secret is between the acrylic elements” Sowder explains. “We take a color measurement through the materials and compensate for it to ensure that it is perfectly neutral.” The results are a disc that acts like a gray card, yet doesn’t bend, fade, crease or otherwise become a hassle to carry with you and use effectively. The ExpoDisc comes in a variety of sizes and also features a “Warming” version that is targeted at portrait photographers because it adds more green/blue into the filter itself, therefore giving the overall corrected image a greater red/yellow bias, which should add subtle overall warmth to skin tones.

The idea behind the disc is also quite simple. By covering your favorite lens with the ExpoDisc and pointing it at the light source for your images and giving the frame a correct exposure, you’ll create a perfect 18 percent reflective “gray frame.” There are however different ways that the ExpoDisc can be used, and I found that the simplest (and preferred method by ExpoDisc) is to make a custom white balance using the disc over the lens. The results are consistent on my calibrated monitor, and resembled the color of the scene that I recalled in comparison to the other white balance settings I used. In short, the ExpoDisc is an amazingly simple way to save yourself an endless amount of time correcting color — particularly if you have a large group of images that will be shot under identical lighting conditions.

The disc is thick, feels very solid in your hands and is available in 58mm, 62mm, 67mm, 72mm, 77mm and 82mm filter sizes. On one side, you’ll notice a micro prism-like pattern that gathers light from a 180 degree angle of view. When flipped over, you see a smooth, opaque white acrylic, similar in color and feel to white Plexiglas. The two circular discs are enveloped by a black, high-grade aluminum that has a perfect finish and texture. You’ll also notice a string that attaches from the aluminum filter casing to the supplied neck strap. I found this combination to be smartly designed and convenient for me when I was shooting in scenes that had changing light conditions. I tend to wear shirts with pockets on them, so rather than allow the filter to dangle from my neck, it was easy to put the disc in my pocket and the strap around my neck, keeping it ready at a moment’s notice. If having the disc in your pocket isn’t your cup of tea, ExpoDisc also provides a well made holder that has a loop in the back for belts. My only complaint with the holder is that it’s got a velvet lining. While this looks and feels great, the disc fits into the holder very tightly and rubs off the velvet, which attaches onto the ExpoDisc. I had to consistently wipe down the disc after storing the filter in the case because there was enough of this black residue on the disc that I felt it could have the potential of throwing off the color reading when I white balanced. Still, this is a minor inconvenience and I expect that the more I use the case, the less this will be an issue. If I were grading the build materials, the ExpoDisc would receive a solid “A.”

I noticed three small golden stubs on the aluminum section of the filter, and after close inspection, realized that these are three very small spring-loaded balls which are used to hold the filter in place on a lens. This to me is groundbreaking in filter design and after I realized what they did, I found it very convenient to use. No screwing this filter on and off; the ExpoDisc simply pops into place and holds firm. Of course, this is assuming that you have the proper filter diameter for the lens in use. Not all of my lenses use the 82mm filter size though, but it was almost just as easy to hold the ExpoDisc in front of my lens and make my white balance readings. I also own a 14mm Nikkor lens that was too wide to use with the ExpoDisc. It showed uneven lighting through the viewfinder, and I think that wouldn’t make an accurate measurement. To avoid this situation, I simply used another wide angle lens with a smaller diameter to make the light balance reading and then changed lenses. It’s not a huge issue, but it would be nice to have a disc large enough to cover these types of lenses — particularly since most lens makers now have ultra-wide angle lenses and super telephotos with large diameters for their digital cameras.

According to ExpoDisc’s CD manual, the recommended procedure is to use a custom white balance — this means that using an autoexposure mode (A, P or S) or a Manual Exposure (M) and then exposing the sensor to a pure white light. With a Nikon D200, which is the camera we used for the images in this story, you depress the WB button on the top left portion of the camera body and change the setting to “Pre” in the LCD. Once the “Pre” is flashing, point the camera, lens and disc toward your light source and depress the shutter. If the camera records a good white balance, you’ll see a “Good” flashing on the LCD. No frame is actually recorded by doing this, so the best backup is to make an image with the Expodisc in place and use a RAW file format, which will not only allow you to convert several images at once, but save those conversion settings for future use. In the case of studio images, you need to determine a correct exposure first, then point camera, lens and Expodisc toward the strobe from the subject location and balance.

(If you’re not able to use a custom white balance, simply shoot a properly exposed frame with the filter in place, then in Photoshop or other image editing program, pick any point on the image as a middle gray in Levels and process all like-lighted images with the same settings.)

Overall, I found the ExpoDisc to be one nifty little slice of imaging technology. I shot one commercial job, at a car show with lighting that was a mixture of strobe, Sodium and Mercury Vapor. The paint on the cars looks wonderful — no green casts and absolutely no post-processing for color correction. I’m guessing that on the first job, this filter saved me an hour or two of Photoshop work. With that kind of time savings, I can easily justify its cost. I also found out that I tend to like warmer coloring in my images. I was a little surprised at the coloring when I first used the disc, and had to keep reminding myself that this disc is designed to produce neutral colors, which it does very, very well. I tend to think though that most photographers will gravitate toward the warmer toned ExpoDisc because of the warmth in skin tones and landscapes. And the design is just flat-out clever. I am amazed at the simplicity, yet high precision of this small device. George Wallace would be proud of his family for their continued pursuit of his dream. It’s a welcome addition to my camera bag and I highly recommend it.