Click photo to see images of all the Editor’s Choice 2007 products. A good tripod doesn’t just free up your... 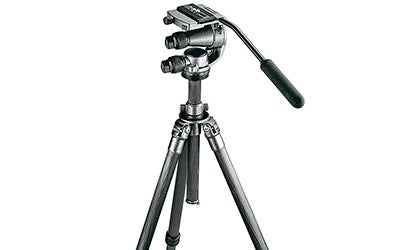 A good tripod doesn’t just free up your hands or let you put yourself in the picture. It stabilizes your camera to keep photographs sharp, gives you a wide range of options for positioning your camera, and maintains precise framing — in fact, it can even make you think harder about your composition. The best tripods strike a sensible balance of portability, stability, and versatility. The models on this year’s Editor’s Choice list run the gamut in their size, weight, and features, but they all have a lot to offer for their price. And all are compatible with a wide range of tripod heads, which are sold separately.

This carbon-fiber tripod’s light 3.1-pound weight makes it extraordinarily easy to carry for a model with a maximum height of 54.3 inches — 63.4 inches with the center column fully extended. Its three-segment legs use Gitzo’s new G-Lock twist-lock system, a variation on the traditional knurled locking collar that’s said to increase the stability of the ‘pod when the legs are locked at narrower angles. The GT2530 gives you a choice of three such angles; both leg joints and twist locks are smooth and easy to operate. The rubber feet unscrew and can be replaced with other types of feet that Gitzo sells separately. That makes the tripod less versatile out of the box than a model with the familiar combination rubber-and-retracting-spike feet, but the included feet are shaped to provide good stability.

Photographers looking for unusual flexibility in an affordable, lightweight aluminum tripod will appreciate this new 3.9-pound model. Its center column can be removed and remounted horizontally, and although Manfrotto doesn’t advertise the feature, it can also be reversed. A simple swiveling element inside the component that holds the center column in place allows you to switch quickly and easily between vertical and horizontal positions. Instead of putting a hook for extra weight on the bottom of the center column, as is typical, Manfrotto placed the hook on one side, near the tripod shoulder. This allows you to increase stability by providing a counterweight to the camera when you have it mounted on a horizontal center column. The tripod also has a built-in spirit level.

Folded up, the 190XProB is 22.4 inches long. Unfolded, it’s designed to support up to 11 pounds of camera. Its four flip-lock leg segments extend to a 48-inch height, 57.5 inches with the center column fully extended. The legs lock at four angles — more versatile than the usual three. This ‘pod can also get quite close to the ground, with a 3.3-inch minimum height when you’re using the center column horizontally. Two of the legs are padded, making the new Manfrotto easier on the shoulder and more comfortable to the touch in cold weather. The supplied rubber feet can be replaced with spikes, sold separately. About $145.

This three-pound carbon-fiber tripod offers one of the best values in an ultracompact model these days. With four twist-lock leg sections, it collapses to just 18 inches. Although the legs look thin near the feet, the ‘pod is built to support up to 11 pounds of gear. It extends to a maximum height of 47 inches, or 61.2 inches with the center column fully extended. The column can be reversed, and has a built-in weight hook. The 714 even comes with a canvas bag that you can fill with stones (or other available materials) and attach to the tripod legs like a little hammock, for extra, on-the-spot stability.

The new Slik’s legs lock at three angles and have retractable spikes integrated into their rubber feet. At their most splayed-out position, they allow the tripod to be lowered to its minimum height of 7.25 inches when you reverse the center column. Padding on the legs’ top segments makes for comfortable handling, though it’s not really necessary on a small carbon-fiber model and creates a little extra bulk when the tripod is closed. About $245.

If you’re buying a tripod on a shoestring budget, this aluminum model will give you all the basics for well under $100. It’s the only tripod in this year’s group with a head included in the price, so there’s no need to purchase one separately. The head’s three-way pan/tilt design, which is operated with twist-locks and a panning handle, is suitable for both photo and video shooting; the tripod comes with two quick-release plates so you can leave one attached to your camera and one to your camcorder. The standard head can also be removed, either to use a different head with the legs or to mount the head on the bottom of the center column for low-level shooting.

Built to support up to 11 pounds of gear, the 757 weighs a modest 6.2 pounds, head included. The head isn’t made of the strongest stuff, though, so we’d keep one hand on it if mounting a very heavy lens. Closed up the tripod is 29.3 inches long. Fully extended, it rises to 61.5 inches; crank its geared center column all the way up and you get a surprising 74.8 inches of height. Although this model’s three-section legs aren’t particularly sturdy, it compensates by attaching them to the center column with built-in braces. Other handy features include two spirit levels (one on the head and one on the legs) and retractable foot spikes. About $80.

If you’re a pro basketball player looking for an eye-level tripod, this carbon-fiber model is a slam-dunk. Its three-segment, twist-lock legs extend to a 70-inch height on their own, and the tripod reaches a towering 79.7 inches with the sturdy geared center column all the way up. Yet the lowest of its three lockable leg angles allows it to get down to a 13.8-inch minimum height (head not included). The center column on this model isn’t reversible, but it has a built-in mounting screw on the bottom for attaching a head or the supplied weight hook. Also included in the package are a nylon bag for weight stabilization and tools for tightening up the head platform or adjusting the shoulder tension.

Designed to support up to 30 pounds, this tripod weighs 6.7 pounds and measures 32 inches when folded up. Its legs have foam padding around their top segments for comfortable carrying over a shoulder, as well as retractable spikes in its rubber feet. The hand crank for the center column is nicely designed, folding in easily when not in use so that it doesn’t protrude when the tripod is closed. About $600.

Flexibility is this 5-pound aluminum alloy tripod’s strong suit. Its reversible center column can be removed and reinserted horizontally. Two smoothly operating keys loosen the top portion of the platform that holds the center column in place and let it flip up 90 degrees. When the column is mounted horizontally, it can swivel 360 degrees and tilt up and down, then be locked in place. With the legs at their widest angle, the horizontal column lets you bring the camera as close to the ground as you like. Switching the center column between vertical and horizontal is quick and easy. The column also has a built-in weight hook at the bottom, and on top of the legs there are both a fluid level and a little compass.
The AX214’s four-section twist-lock legs can be locked at three angles and can bring the tripod to a maximum height of 58 inches, or nearly six feet with the center column all the way up. One of the legs is padded, to make it more comfortable to handle in the cold and easy to carry over a shoulder. The tripod comes with a carrying strap that attaches to a built-in hook, as well as a nice padded bag. You can also hook the little tool case that comes with this pod onto the hook. It contains a wrench and a hex key for adjusting the leg tension and tightening up the mounting plate, as well as spiked metal feet that are interchangeable with the tripod’s rubber ones. The AX214 is built to support up to 17.6 pounds of gear, but it folds up to a compact 22 inches for carrying. About $190.